SO I saw the new movie Looper recently. It was a time-travel-crime-drama that I have to say was one of the better movies I have seen in a while. 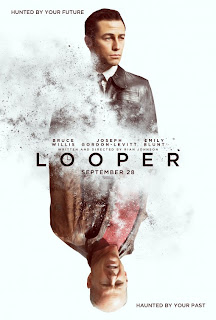 Looper is defiantly one of those movies you have to see more than once to catch everything it has to offer. Kind of like another of JGL's movies... 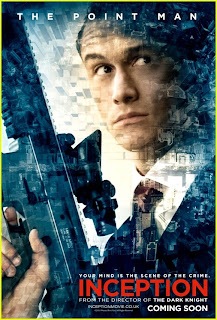 Basically, Joseph Gordon-Levitt plays a “looper” named Joe in the year 2044. A looper is an agent hired by a crime syndicate (that exists 30 years in the future) to kill people sent back to the year 2044. Keeping up so far?

JGL gets a pay day to kill each of the people sent back to him. He does this loyally to the leader of the 2044 syndicate, Al (Jeff Daniels), until it comes time for JGL to “close his loop.” Closing a loop means killing ones future self. This proves difficult for him as his future self turns out to be Bruce Willis.

I loved the concept of this movie. The writers were able to keep the time line clean enough so that there was not too much confusion when it came to people and events.  That is never easy to do when it comes to anything time travel.

My only major gripe with the movie was that it was JGL’s first lead role but his character was a reflection of Bruce Willis. All of his acting potential and all of his abilities went in to mimicking an actor who already had a set acting style. I’m not saying JGL was terrible at it quite the contrary actually. He was able to perfectly reflect Bruce’s facial expressions, mannerisms, and even his voice. Add on the CG effects and he looked and acted EXACTLY like Bruce Willis. This is a great reflection on an actor when they are so easily able to play a role like that. I guess I was just disappointed that he did not have the opportunity to showcase more of his talents as an actor. He did not have the opportunity to make his first lead role “his own” since it was just a reflection of a preexisting actor with an already established acting style. 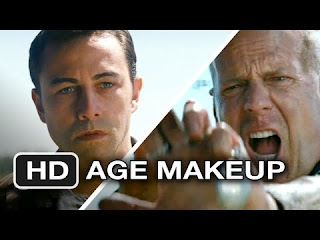 When it comes to time travel movies, even when the time line is kept nice and clean questions start to arise. I was left wondering why the crime syndicate of the future didn’t just kill people in the future and send their corpses to the past to be disposed. After all the main reason they were being sent back to the past was because, “It’s near impossible to hide a body in the future.” That way they could be sure the person was dead and they would not have to worry about a “loop running.”

I also wished there had been a little more development with the character referred to as “Kid.” He worked for Al and had a knack for doing stupid sh*t.  He was really cocky but only ever managed to f*ck up and make the situation worse than it already was. I had no idea (until a friend pointed it out) that Kid was the 2044 version of Jeff Daniel’s character, Al. Looking back I can see the subtle hints in the movie. Both characters walked with a limp, both had a southern drawl, and no matter how bad Kid managed to f*ck up, Al never seemed to do more than break a few bones. I didn’t realize he was preserving the character as not to harm his future self. The hints were super subtle and I feel like that would have been an opportunity for a “big reveal” at the end of the movie.

Maybe I’m just simple though. I’m curious to see what else people were able to pick up on the first time through the movie. I guarantee I missed something. This is one of those movies I look forward to seeing the DVD extras on. You can tell parts had to be trimmed down for the sake of time. I feel like there was more about Al’s future experiences we probably did not get a chance to see in the big screen version. But again, I look forward to the DVD.