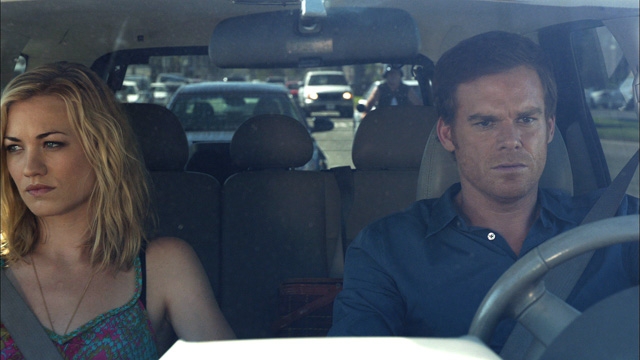 Episode 7: Chemistry
The episode picks up with Dex and Hannah, post coitus. Dex wonders if it’s chemistry that brought them together. I’d wager it’s your predilection for damaged blondes.
They have some knifeplay, Hannah gets on top and almost impales Dex with said knife.

Meanwhile, Deb has a nice date with true crime author, Sal. He mentions that Hannah’s allegedly-murdered husband has a sister who might let Deb exhume the body, so they can check it for poison. That and Sal wants to know what kind of music Deb likes? “The sound of a jailhouse door slamming shut.” (who the fuck writes this crap?) And, since everyone’s boner is effectively killed by that last statement, Sal goes home unsexed.

The morning after, Dex and Hannah agree that they shouldn’t see each other anymore. Because that will totally happen. Dex asks why she didn’t ask for an explanation to why the snow-making machine at Santa’s Happy Sex Palace was still operational during the off season. Just kidding, she didn’t ask about the whole serial killer thing because she doesn’t need to know. Fair enough, I suppose.

And who should Dexter see across the street but Sal, who’s got a mad-on for Hannah. To interview. Oh, and he knows about Dex’s shoddy blood work on the Wayne Randall case. Sal wants to tell people about it, but Dexter agrees to give him an interview about Wayne’s final moments (hit by a bus, if we’re recalling).

At Miami Metro, Deb does her best to dissuade LaGuerta off the whole Bay Harbor Butcher case. LaGuerta seems to agree, so hopefully she doesn’t continue snooping around later in this episode.

Deb then goes to Dex and tells him she knows about him covering for Hannah. Because Sal said so. Or something. Forgive me, every time Sal is mentioned or shows up on screen, my mind tends to wander. He’s boring, is what I’m trying to say.

Angel tells Dex that Issak’s lawyer is on the way, so they’d better get that blood evidence ready for him to check out. What’s that? The blood evidence went missing? Well then the team better get back to the crime scene to get some more blood! (We all remember Quinn destroyed the evidence to save his stripper girlfriend, right? Right.)
They hurry to the bar where Issak murdered all those Colombians, but someone tampered with the sewer line or somesuch, because the bar is flooded with poop. So no blood evidence for them. Also, Angel pulls Quinn aside and asks him about his name on the evidence locker log-in sheet. He couldn’t have possibly been the one to tamper with the investigation? Quinn says no, and Angel believes him. Let’s italicize that for effect: Angel took Quinn’s word when he is not only obviously guilty but also has a past with the Russian mob. Maybe Angel does need to retire.

Dex breaks the poopy news to Deb; guess Dex will just have to take care of things himself. No so fast, says Deb. They’re putting a tail on Issak, so don’t try anything sneaky, Dexter.

Sal swings by Miami Metro to give Deb the info on Hannah’s sister-in-law, and to ask her out on another date. Sal is pushy and annoying, and I certainly hope nothing bad ever happens to him.

Let’s put on the brakes and stop to find out what Quinn is up to. Blah blah blah Russian girlfriend. Yadda yadda yadda Quinn is dumb. He tried to buy Najda’s freedom, but all he’s done is put himself on the Russian mob’s payroll, essentially.

Deb interviews Jake’s (Hannah’s husband) sister. She says that Hannah was pregnant, but had a miscarriage after Jake died. Oh, and she agrees to have the body exhumed.

Sal decides to pay Hannah a visit at her flower stand. He’s vaguely threatening in a boring way, and he gets Hannah to agree to an interview when he says he’ll ruin Dexter. He’s also a terrible writer by the way:  “Her lust for killing never stopped, she just switched from knives to poison.” (I think that's it. I could rewatch that scene, but I won't.) That’s in his alleged preface to his book. What are you people reading on this show? Because if it’s all that bad, I have my answer as to why the dialogue on this show is so atrocious.

Dex is in research mode, and plans to do a frame-job on Sal with a likely case that Sal wrote a book about. Ghost dad interjects with some unheeded advice. Poor ghost dad, no one ever listens to him.

Dex pays Hannah a visit. She mentions what an asshole Sal is being about the whole interview thing, and Dex advises against killing him. Hannah is not convinced; she wants him gone. Here’s where we get some insight into Hannah’s MO: she believes in nature as the ultimate decider and survival of the fittest. Why not kill Sal if he’s in her way? Dex disagrees.
He muses to himself that Hannah accepts him, and isn’t anything like Lila, or Rita, or Lumen. Right, Dex. Keep telling yourself that.

Deb gets Jake’s body exhumed, but since the body wasn’t embalmed, there’s no way to get tissue evidence. She later has lunch (aka Scotch) with Sal and they talk about something really important, I’m sure. Here are my notes on this scene: Deb meets up with Sal, blah blah blah.

So, while Hannah gives Sal his interview (and does a great job of selling the whole “I was an unwitting accomplice” cover story).
Dexter snoops around Sal’s apartment. There he finds some DNA—his toothbrush and floss, you sickos—and also decides to destroy all of Sal’s writing on Hannah. As if he’d keep a single copy of all his notes on one computer. Hasn’t he heard about external hard drives? Or Dropbox? (shameless plug)

After an afternoon of breaking and entering, Dex has lunch at a random restaurant, where Issak pays him a visit. They look at each other menacingly. Dex makes a lame coyote vs roadrunner analogy and Issak gives Dexter money for a single french fry (he calls it a “chip” but I know my foreign slang).

That evening, Sal pays Dex a visit for the interview. But Dexter is more interested in telling Sal how he’s gonna frame him for random-murdered-girl’s death. Sal gets pissed when he hears about this. So mad he has a heart attack and smacks his head off Dexter’s coffee table. But if you’ve been playing along, the type of poison Hannah uses causes a heart attack. Happy coincidence? I think not. Sal is dead, and Deb is pissed.

They bring Hannah in for questioning the next morning. Deb does her best to get Hannah to crack, but she doesn’t budge. She instead tells Deb a saying her grandma used to say. Something about cheaters never win with two in the bush while making the heart grow fonder. They let her go. Deb is confident Sal’s tox-screen will show the poison in his system.
Dex leaves work and pays Hannah a visit. She says she saw an opportunity to kill Sal, and she took it. He was going to write a book about her, after all. Dex is concerned they’ll find the poison in Sal’s system, but Hannah assures him there won’t be enough to detect. She put the poison on his pen. Get it? Poisoned pen? Get it?! Sal writes with a poison pen! Oh, this show is so poetic sometimes. (Is that sarcasm? Even I can’t tell.)

Dex tells her the book is gone, he’s deleted the only copy known to man. And no one can recover those files. Ever. This show, sometimes it makes me want to punch things.

Oh, and Hannah’s husband didn’t want to have kids. He wanted her to get an abortion. So she killed him. And then she miscarried. Whoops.

Elsewhere, Quinn gives Angel $10,000 to start his restaurant because I officially don’t care.

Deb goes through Sal’s belongings and finds his tape recorder. Matsuka stops by to deliver the bad news: no poison detected in Sal’s system.

And in “this will end badly” news, LaGuerta keeps investigating the BHB, and comes across Dexter’s name on some marina manifest. Or something.

As Dex sleeps over at Hannah’s, he gets a call from Deb. She’s listened to Hannah’s sobbing confession on Sal’s recorder. Deb wants Dexter to kill Hannah because she’s in a bad mood because she didn’t get to screw Sal before he died. But, to be fair, isn’t that why we’re all in a bad mood about 90% of the time?