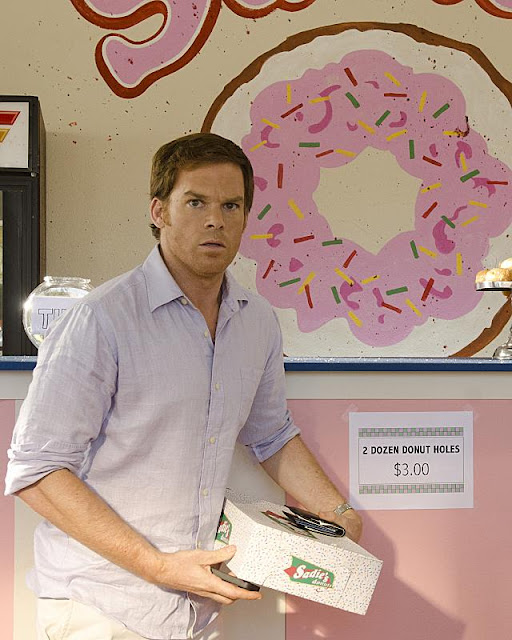 How is everyone doing? Getting ready for Thanksgiving? Going out on Black Friday to knock some grandmas down with a shopping cart in the Wal Mart parking lot? Or will you be like me and have your eyeballs glued to Amazon’s Lightning Deals so you can get a copy of Vampire Diaries season 2 for $10? I ask these things because it’s rude to just start the recap without a bit of banter. It’s like Dexter not knowing what a booty call is in this weeks episode. Segueway! I have to say, this episode wasn’t too bad despite all the kids running around. We got some major pieces to the puzzle that is this season, including something I predicted way back when.

So what do serial killers do the morning after hot, hot sex? They make omelets, of course! Dexter notices Hannah’s out of date Argentina calendar, and she tells him she’s always dreamed of going there. Dexter tries to be cute, but I find it annoying. Don’t try to be cute. He gets a call from Deb (of course), and rushes over to her house (of course).

Deb still has vagina rage over Sal being dead, and she’s offended that Dex won’t kill Hannah even though she fits his code. Guys, it was, like, totally hard for her to even ask Dex to kill someone. Dex gets a random text from Aster—oh shit, it’s gonna be a kid-filled episode. Dex makes a decent point that even if he agreed to kill Hannah, could Deb handle it? Her asking this of him might send her over the edge.

Over at our favorite strip club, Issak eludes the easily bamboozled Miami police. Speaking of rage-ons, Issak is off to kill Dex when George pleads with him to let it go; one Miami Metro officer is dead, why add another? It will bring them down on the whole Foxhole operation. Issak is all “oh, I’ll consider it,” but we all know he’s not.

Hey, remember how Dexter used to get donuts for everyone in the department? Whatever happened to that? Oh, you mean they need a random place for Dex to be so Issak can take a few pot-shots at him then drive away?
Oh, and to make matters worse, the kids are in fact coming to visit.

The gang is all atwitter at Miami Metro about Dex’s drive-by. Deb wants to arrest Issak, but even I know that’s a bad idea. Instead Dex says he’ll handle Issak and could the kids come stay with aunt Deb so they don’t get murdered by the Russian crime lord? This is actually a pretty funny scene, with Dex poking fun at Deb’s lack of a kid-friendly home. After Deb agrees, she mentions that she’s gonna pay Hannah a visit because pussy rage.

Oh, and Angel has a restaurant now.

Do you even care what happens when Deb talks to Hannah? Let’s see, Hannah tries to spin a story but Deb isn’t buying it. The end!

At the Foxhole, George makes a call to his higher-ups about Issak. It sounds a lot like they’ve given him the go-ahead on taking Issak out. We’ll see how that plays out later, but first let’s watch Quinn drop Nadja off at work. Thrilling, I know. George comes over and asks Quinn about doing another job, and Quinn—ever the wordsmith—tells him to fuck off.

Dex is off stalking Issak when he gets a call from Jamie; she and the kids are on their way to Miami. Dex tells her to meet him at Angel’s restaurant, because he has some snooping to do.

In one of the better moments this episode, Dexter comes across another hitman while looking around Issak’s place. Dexter easily overpowers him and slits his throat.
Meanwhile, LaGuerta continues her investigation into the Bay Harbor Butcher, which is leading her closer to Dexter. I’m sure this will turn out great for everyone.

Sometimes I think the writers on this show have never interacted with children before, because the level of awkward writing is off the fucking awkward scale. So, Dex, Deb, Jaime and the kids—Harrison, and the tweens Aster and Cody—are all having lunch when Cody reveals to everyone that Aster smokes pot. Gasp. Aster runs away, and Dex and Deb leave Cody all alone at the table. Good job, guys. I really hope Issak swings by and murders him to teach you a lesson.

The show gets all “After School Special” on us, when Dex and Deb tell Aster how bad marijuana is. Oh, and Dexter throws in something about his own vices. Yes, having a joint or two for stress relief and straight up murdering other murderers is exactly the same thing.

Back at Deb’s, she apologizes to Dex for asking him to kill Hannah. Deb understands he’s not going to kill Hannah for her because how fucked up would that be? Oh, just you wait, Deb. The truth will make you swear a lot. Well, swear more than usual.

Later that evening, Dex swings by Hannah’s place to tell her he can’t see her for a while. The Russian—sorry, Ukranian—mob is after him. Hannah takes it in stride when Dex fills her in on his situation. Hannah offers her own advice; investigate Issak the way he did her. Makes sense, right? If Dex won't take advice from his own dead father, he's not gonna take it from you. Dex also borrows Hannah’s rape wagon so Issak won’t recognize it.

Over at Nadja’s, George stops by to talk to Quinn (Nadja is conveniently in the shower). Did I say “talk?” I meant “blackmail.” See, George has recorded evidence of Quinn agreeing to destroy the blood evidence against Issak. Whoops! But all George is asking is for Quinn to provide support while the Foxhole deals drugs. Please let this storyline end in Quinn’s satisfying death.

Issak discovers the dead hitman on his floor, and he calls the cops. As Miami Metro do their thing, Issak mentions he has an alibi and...wait, did he just give Dexter the look? The “I want to be all up inside you” look? Nah, it was probably my imagination.
After the crime scene, Dex spends some quality time with the family at the beach.
He has a heart-to-heart with Aster wherein he lets her know he won’t tell anyone about the reefer. He then gets a call from Hannah, who left her greenhouse key on her van keychain. Can she swing by and get it? Of course she can. Hannah sees Dex and his family and she seems a tad jealous. She tells Dexter she doesn’t have the anonymity he has. But all I can imagine is Hannah poisoning everyone in his family. Oh god, that’s how this season is gonna play out, isn’t it?

That night, Dexter conveniently shows up at Deb’s after the kids' bedtime. He puts his keys down, but Deb recognizes them as Hannah’s. Whoops! So, Dexter’s other big secret this season is out. Deb has so much feelings about it all; it’s much, much worse because she’s in love with Dexter. So, Deb’s big secret is out, too.
As much as I wanted to hate this scene, I couldn’t. Jennifer Carpenter’s performance is so strong, that I at least empathized with Deb's predicament somewhat.

Deb (to Dex, obviously): “You’re a serial killer, and I’m more fucked up than you are!” Seriously, as to why this girl hasn’t been nominated for more awards is beyond me, especially with the crap she had to put up with last season.

Dexter doesn’t really know what to say. I mean, can you blame him? His adoptive sister just said she’s in love with him. So instead, he goes out with the intent to kill Issak. But there’s a problem, and not just the cops following Issak...

You see, Issak is gay. Dexter followed him to a gay bar. Like, a classy bar, not something out of Queer As Folk. I wondered about Issak waaaay back at the beginning of this season, and I’m glad that my suspicions paid off.

Dexter and Issak talk for a while about their lost loves, and it’s such a great scene. It makes me sad that Issak will most likely die at some point this season. It’s also nice to see a “normal” gay character on a show. He and Dexter are a lot alike; Viktor was Issak’s everything, just like Rita was for Dexter. Issak talks about love being “inconvenient and dangerous, but never wrong.” But Dexter doesn’t really get it. He wonders, though, what would Issak do after Dex is dead? Probably go far away. “Argentina?” Dex suggests. Oh, Dex.

“Everyone wants an Argentina,” Dex’s voiceover says as we’re treated to a montage of what everyone is up to at the moment. Quinn is helping drug dealers, Issak is pining for Viktor, LaGuerta is looking at Dexter’s boat, Deb and Aster are smoking pot together, and Dex and Hannah hug it out till the end of the episode. 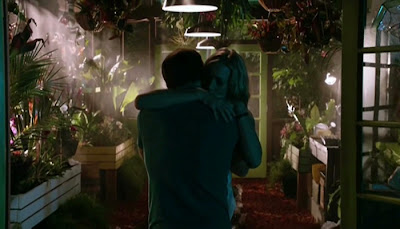