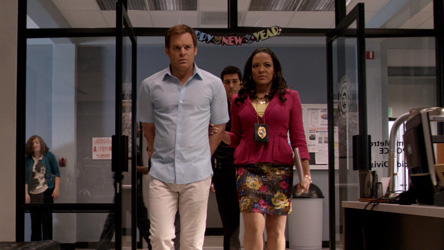 This weekend, I was supposed to make my way to Arizona to hang with the UC’s own Brittany and party like the world was ending. Long story short, the lovely (but not really) people at US Air were so unforgivably rude in their refusal to let me on the plane, despite me getting there well within time, I had a terrible panic attack/breakdown. Needless to say, I did not get to join my friends in AZ.

And now I have to review this stinker of an episode. You have no idea how happy I am this season is over. Let’s see, in this episode, character’s storylines are woefully written, and we’re treated to some pointless flashbacks.

Oh, and it’s Milla Jovovich’s birthday today, which means it’s my birthday, too! Coincidence? Well, yes, most certainly. But it is cool.
Episode 12: Surprise, Motherfucker!

The episode starts with Dexter visiting Hannah in prison. Dex still thinks Hannah poisoned Deb, and I guess they allude that Hannah did in fact poison her. So already, the writers have squandered what could have been a mind-blowing twist of Deb faking her own attempted murder.

After they say how much they love each other but can’t trust each other (And is it just me, or does Dexter sound constipated through all of this?), they kiss, Hannah apparently nicks an artery in Dexter’s lip, cause he’s bleeding a lot. And then he uses his bloody hand to open the door when he leaves.

Hannah calls Arlene and makes good on her loyalty. You’ll see how later.

Afterwards, Dex is at home, playing with his son, when there’s a knock on the door. Surprise, motherfucker! It’s LaGuerta, and she has a warrant for Dexter’s arrest. She walks him through Miami Metro.
There’s an intense exchange between LaGuerta, Angel and Deb, who has to recuse herself because she’s Dex’s sister from another mister (and mother).

LaGuerta interviews Dex, and shows him the evidence she has on him, Seems she took pics of Dex taking full garbage bags out to his boat, and they appear to have Estrada’s shirt and wallet in them. Dexter turns the tables on her when he brings up how insane she sounds right now, and Matsuka turns up troubling news: the shirt was old evidence, and the wallet has a partial print: LaGuerta’s.

Forced to let Dexter go, LaGuerta is on the warpath now that Dex made it look like she framed him. They have a brief, vaguely threatening conversation in the elevators. This leads into one of many terrible flashbacks. Lost this certainly isn’t.

Surprise, Motherfucker! There’s Doakes in a flashback with a dorky-haired Dexter. He comes to Dex with a problem; this one murderer keeps getting away, and he can’t get any evidence from him. Then, Dex witnesses LaGuerta turn Doakes’ offer to move in together. Doakes comments that Dexter is “invisible.” I comment “What was the point of that flashback at all? Aren’t we sorta kinda privy to all of this?”

That night, Deb pays Dex a visit. She’s still surprised at the lengths Dex will go to keep himself safe. Also, tomorrow is Hannah’s hearing, and she’s concerned about her spilling about Dex’s true nature for a plea bargain. Dex assures her that Hannah loooooooooves him, so she won’t say anything. Also, they trust each other implicitly.

Ghost dad stops by after Deb leaves and says something I don’t remember at all. Sorry, ghost dad! Something about Estrada still being alive, maybe?

Dex checks out Estrada’s ex to see if she’s seen him. She says no, but Dex suspects otherwise. He follows her to a park where she meets up with Estrada.

Surprise, motherfucker! It’s another flashback! Dex and Doakes are at a crime scene, and Dex is doing his blood spatter thing, and Doakes is weirded out by it.
Again, what is the point? We know that Doakes thinks Dexter is weird. Can we move on? Terrible dialogue by Doakes as well.

At Miami Metro, LaGuerta talks to Tom (former police captain), and he informs her that there will be an official investigation into her shenanigans. Time to kiss ass! LaGuerta says it’s just because she’s passionate and got caught up in it all blah blah. Tom tells her to stop being a moron and get back to work.

Hannah has her court hearing, and exchanges some barbs with Deb. “I may be a liar and a killer, but I’m not a hypocrite.”
The judge rules her to remain imprisoned until her trial. Arlene is there and slips Hannah something when they hug. In the prison van, Hannah has a mysterious seizure and gets whisked away to the hospital.

That evening, LaGuerta calls Deb into her office to apologize about being such a crazy bitch. Or at least, that’s how it starts out. She grills Deb about Travis Marshall’s death (you know, burning the church down). Deb plays it cool until LaGuerta shows her security footage evidence—labeled “deus ex machina”—of Deb getting gasoline at a nearby station close to the church.

Dex finds Estrada at the park, and he pays off some kids to smack him with a baseball and run around back of Dex’s SUV. It works. Dex drugs Estrada and throws him in the back. He gets a call from Deb. They meet up and she tells him all about LaGuerta’s theory. Dex seems at a loss for a plan; he needs to know LaGuerta’s next move.

Dex breaks into LaGuerta’s home, and he finds warrants for his and Deb’s cell phone GPS’. If the warrants go through, then she’d have further evidence. Ghost dad tell him to take Deb and Harrison and run. But Dexter doesn’t want to run; his fake life has become his real one. He wants to kill LaGuerta, even though she doesn’t fit his code (she’s technically an innocent).

In yet another flashback, Dex brings the Miami Metro gang donuts. He offers one to Doakes, but he’d rather have a piece of LaGuerta. And in a scene of ludicrous stupidity, Dex tells Doakes a dumb saying that he read in the killer’s notebook. The one that Doakes has had locked in his desk. So I guess we all now know that Doakes thought Dex was weird. Oh, wait. We already knew that from season one. I honestly don’t know why these flashbacks were even necessary. It showed us no insight to any of the characters. It only served to remind me of how amazing the earlier seasons were.

Anyhoo, Dex leads LaGuerta into a trap. He has Estrada all tied up. They chat about Dex’s mother and about killing for normal reasons. Blah blah. He stabs him. Then LaGuerta shows up and gets drugged by Dex.

Meanwhile, Angel’s New Year’s Eve party is in full swing. Matsuka is as goofy and adorable as ever, and to rub salt into our gaping eyeball wounds, they allude to Quinn and Jamie hooking up next season. Yes, because that’s what we want. Oh, and Deb is concerned Dex is out killing LaGuerta, so she gets dispatch to tell her LaGuerta’s position.

She gets there just as Dex is setting up the scene. He’s going to shoot Estrada with LaGuerta’s gun and then shoot LaGuerta with Estrada’s gun. Wouldn’t it be easier to frame her for the murder? Just saying.

A standoff ensues. Deb holds Dex at gunpoint, while Dex and LaGuerta both talk at her. And because they can’t kill off Dexter (he is the name of the show), Deb shoots LaGuerta.
Then Deb and Dex walk through a slow motion NYE party.

Oh, and did I forget to mention Hannah is fine? Seems like the show almost forgot about her as soon as Dexter did. 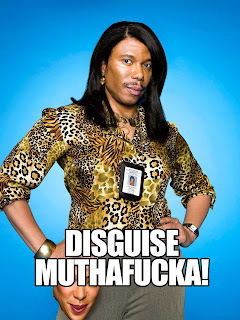 Well, that’s it for this season. I think Dexter had such potential this year, but squandered it at every turn. Still, it was fun to write about it every week!

Speaking of which, look for more recaps from me come January, as I’ll try my hand at both Girls and Enlightened!