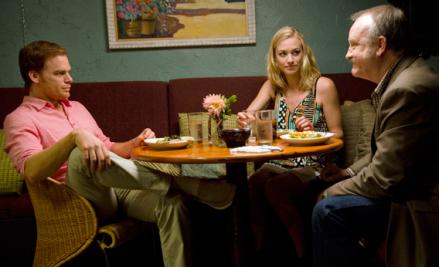 Ever have one of those days where you just don’t want to do anything? I’m surprised I even had the wherewithal (one of my favorite words, by the way) to take a shower this morning. But because I feel like I’d be letting the whole internet down, I sucked it up and sat down and watched Dexter this week.

In case you didn’t read my recap last time, I was less enthused about where the season was going. Did this episode help to allay my feelings? Not really, but we did get some nice performances, some more Quinn shenanigans, and an evolution of sorts for Dexter.

The episode opens on another Phantom arsonist crime scene. It’s still the same MO, with the name “Bobby” scrawled on the wall. Dex is convinced that arson investigator Bosso is the culprit. I thought he was a big old red herring, but I suppose we’ll have to wait and see.

And who’s that guy at Hannah’s window? It’s her father, whom most of you will know best as Bobby (Jim Beaver) from Supernatural. Daddy Clint has come back, fresh out of prison, to make amends with his daughter. It’s a tense conversation, since Hannah hates him.

In an odd turn of events, Clint gives her a dollhouse. It brings up all sorts of painful memories of him abandoning her for a poker tournament. To make up for it then, he had given her a dollhouse. Smooth move, dad. Way to open all the wounds. Oh, and she starts to think maybe he’s changed. Sure he has.
Back at Miami Metro, Bosso gives his profile of the Phantom, but all Dex has is hungry eyes for the arson investigator. There are a few hilarious close-ups of Dex and Bosso to show how intense they stare at each other from across the room.

Dexter gets a text from Hannah that she’s having coffee with her dad. This in turn starts Matsuka and Angel prying into Dex’s social life. Deb is concerned (How many times have I written that over the course of this season? Someone look it up for me.) about Dexter and Hannah’s relationship. She still wants to bring Hannah down. Oh, and Deb’s started popping pills, which is never a good sign.

Soon after, Dex follows Bosso to a park, where he discovers Bosso isn’t the arsonist, he’s a Civil War reenactor. Oh, and Dexter has the gall to think “he’s just strange,” when Bosso wants to show him pics of his reenactments. Yes, Dexter, he’s the strange one.
Dex gets another text to meet Hannah and Clint for dinner. Clint says he’s completely reformed; he’s going to be a crawfish farmer in Louisiana or some nonsense. Hannah is so taken by his obvious lies, she invites him to stay at her house.

We’re treated to a quick scene where the Phantom sets a bus on fire. We also get enough of a shot of his face to deduce he’s the one guy Angel interviewed in an earlier scene. Nice work, Dexter.
At Hannah’s, daddy Clint hints that he’s looking for some money. And here we have it, the classic “family member returns, fully reformed, only they’re not, they’re still an asshole” trope. He gets mad that Hannah won’t give him $20,000, and leaves in a huff. She gets pissed at Dexter for saying Clint doesn’t seem changed. They talk some more about Dex’s dark passenger for some reason (maybe I wasn’t paying attention), and Hannah finally apologizes.
Dex leaves for the gruesome bus crime scene. Matsuka salvages the security camera, and Deb pulls Dex aside and asks him if Bosso might be the arsonist. Dex says, no, I already stalked him for you. Deb doesn’t understand why he’d do such a thing. Maybe it’s because that’s what he always does?

Are you kidding me? My notes say that Hannah calls Dexter yet again. Apparently there’s some trouble at home. Looks like Clint smashed his truck through Hannah’s greenhouse. She and Dex talk about it, and Clint comes walking in from out of nowhere and starts spewing hypocritical crap about how Hannah ruined his life. He also uses the always classy tactic of telling Hannah she killed her mother (she died of a broken heart, like NatPo in Star Wars). Dex gets all scary, grabs him by the neck and tells Clint to leave. Dex consoles an overacting Hannah.

Let’s bring the episode to a screeching halt to check in on LaGuerta and Matthews. They eat Chinese food and discuss whether or not Dex is the real Bay Harbor Butcher. They also investigate the old site of the cabin where Doakes (the framed BHB) died. Seems as if the place was rented during that time to a certain Colombian drug dealer. One that murdered Dexter’s mother.
Next morning, Dexter makes Hannah breakfast. She feels like a sucker, but still wants to believe her dad is a good man. Oh, and they talk about Dex’s dark driving instructor—she calls it the “dark rider” as if “dark passenger” is that hard to remember. They deduce maybe the dark yoga instructor isn’t an entity, but more like a need or a feeling.

At Miami Metro, the gang goes over the security footage. They find a print as well. But that’s boring. The next few sentences will blow your mind with their insanity.

Quinn gets a call from Nadja that George is going to ship her off to a sex club in Dubai. He goes to save her, but not without Angel, who must need the screentime. Angel watches the door at the Foxhole while Quinn confronts George. Quinn shoots George, chaos ensues, and Quinn gets Nadja to shoot him in the arm to cover up for it. Angel rushes in, and Quinn convinces him to let Nadja go; she’s an illegal immigrant and whatnot. And Angel agrees. He also corroborates Quinn’s story when Deb and the crew get there. This story has gone right off the rails.
Later at Miami Metro, Dexter runs the Phantom’s print through the database, but there’s no match. Or is there? He gets it in his head to check (aka sneak into) the Juvenile records, and finds a match. Seems he was a psych patient.

Ghost dad stops by and gives Dex possibly the only piece of advice that Dex has actually listened to in the history of the show.
He’s wondering where Dex thought up the dark passenger, and does Dex use it so he doesn’t have to take responsibility for all the people he’s killed. I’d have to agree, ghost dad.

Back at Dex’s home, after we’re treated to the obligatory Harrison looking awkwardly off-camera and Jamie in a bikini scene, Hannah’s dad stops by. But this isn’t a social call, he’s here for blackmail. Seems as if there is someone who witnessed Hannah murder someone way back when (before she was Robin to Wayne’s Batman), and if he doesn’t get his money, he’ll spill the beans. Oh, and he’s not going to be a crawfish farmer, he has crushing gambling debts.

Later, Dex tells Hannah all about Clint’s true intentions. Hannah is resigned to give her dad the money, because she can’t kill him. But maybe Dex can? Problem is, Clint doesn’t fit Dex’s code. But the Phantom does...

Dex waits for the Phantom in the flame-protective suit (which was a nice touch, I’ll admit) and has him on the table. Turns out the “Bobby” was one of the Phantom’s childhood friends who liked to start fires, but Phantom got blamed for them and got stuck in a crazy house. Dex says you “can’t blame it on your childhood,” and has a bit of a revelation. He instead leaves the Phantom alive for Miami Metro to find. Deb wonders if Dex had something to do with the anonymous tip...

But Dex is elsewhere, sticking a needle into Clint’s neck, wrapping him up and taking him out on his boat. I wasn’t convinced Dex would kill him until he did. Dexter realizes he doesn’t “have to” kill anyone, but he “wants to.” He stabs Clint and throws him in the ocean.

Afterwards, Deb calls Dex to let him know she’s not giving up on arresting Hannah. Because I’m sure we were all wondering about that. Dex stops by Hannah’s to tell her everything. Just kidding! He lies, my goodness does he lie. But he does admit maybe the dark co-pilot isn’t real.

But wait, there’s a throwaway scene at Miami Metro. So I guess Clint called Deb and told her about the witness to Hannah’s murder. And he would do that why, exactly? If he was going to get the blackmail money (and he had no reason to think othewise) why would he do that? Unless he wanted the money and have Hannah behind bars? I’m thinking too hard about this.

Anyway, I thought Jim Beaver did an excellent job as the crazy blackmail-happy father. And I guess it was nice to see Dexter evolve out of his dark passenger.

Okay, here’s my prediction for the last two episodes, because we've got this promo pic to deal with:

Deb convinces the witness to testify, but Hannah can’t go to jail, so she asks Dex to kill her, or kills herself, which in turn leads to the showdown between Dex and Deb. Or! Dex kills the witness, and Deb figures it out and kills Hannah out of rage. Either way, inevitable sibling showdown.