Five Things About "West Side Story" I Never Knew

And I don't mean the play. Uh, I mean the movie. Sorry.

Here are five random things I learned regarding this movie last night. Yep, instead of going out, I was at home struggling to breathe taking Nyquil. Stupid Erie gave me Typhoid.

Intriguingly, MJ watched it once a week. And of course it gave him the idea for "Beat It."


I'm not going to lie, having the same favorite movie of MJ scares me a little.

2.) Richard Beymer and Natalie Wood could not stand each other.

Oh don't we hear about this with a lot of films? The romantic leads can't stomach each other? I prefer not to think too much about this fact. Natalie was awesome (RIP) and Richard. Well, he was on "Twin Peaks" later in life.


3.) Russ Tamblyn gave birth to Amber Tamblyn some time in the early 1980s.

That's right! Riff, the leader of the Jets and our Benvolio, eventually would give us our future poet laureate, Amber Tamblyn. The two used to appear regularly together in "Joan of Arcadia." I used to LOVE that show. Until the last season then it got weird.


4.) It was originally supposed to be "East Side Story" about a Jewish girl and Catholic boy post-WWII.

I can't even imagine how that would have worked. So glad they changed it. It makes the play/move much more relevant for the time it was released in.

Oy! Maybe Barbara Streisand could have been in it.

5.) The outdoor shots of the film were filmed in the Upper West Side before it was gentrified and became what it is today (not a ghetto).

The demolition of slums was postponed so the movie could be filmed. So the world "West Side Story" exists in is not so much a physical location anymore. However, racism is still very much an issue, as is ethnocentrism. 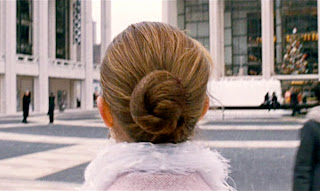 I demand "Black Swan" and "West Side Story" fanfiction become a real thing and involve a time warp!