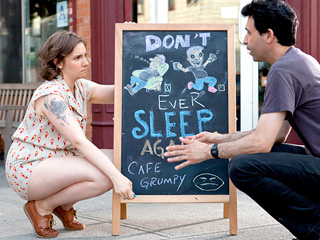 To be truthful, I was so tired today, I didn't know if I'd get these done. But I made iced coffee, and holy shit is it waaaay too strong. Yet I keep drinking it. So, I got these recaps done. How about that?
Can you believe we’re already at the halfway point for both these shows? Crazy. This week, Girls and Enlightened change things up a bit by focusing on one character and highlighting another, respectively.

Oh, did anyone watch the Grammys? Yeah, neither did I.

This episode of Girls focuses on Hannah and Hannah alone, and that’s just fine for this recapper. It’s exhausting to navigate all the interwoven storylines.

Hannah and Ray are outside of the cafe, and Hannah thinks she’s just come up with a new term: “sexit.” Like a sexy exit, as in “let’s sexit this boring party.” Ray looks it up on urbandictionary.com and it’s been used as a quick exit from the act of sex, aka a “French exit.” Hannah is bummed, but our attention switches to Joshua (aka a very sexy Patrick Wilson), who wants to talk to a manager.
Apparently, someone has been dumping the cafe’s trash in his garbage can. Ray has no idea of what he’s talking about, and does his typical Ray bullshit. Joshua threatens to call the cops on him, which only makes Ray go crazier and talk about his “body drum,” or something. Joshua leaves, and Hannah follows after him.

She finds him at his townhouse, almost runs away when he answers the door. Hannah tries to explain something to him, and he asks her to come inside. She voices her concern that he might be a Ted Bundy, because he was very good-looking, too. But she goes inside anyway.
It’s a really fantastic place. He gives her a glass of lemonade, and after a bit of small talk, Hannah confesses: she’s been putting the cafe’s trash in his can. See, she lost the key to the cafe’s dumpster, and decided to dump the trash somewhere conveniently far away. That’s how it started, anyway. Now she’s doing merely for the thrill of it.

Joshua is kind of stunned, but not as much as you’d think. Hannah goes to leave, but winds up kissing him. And he kisses her back. 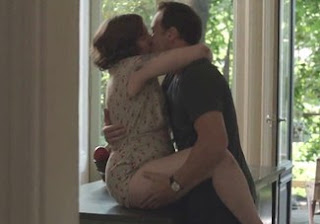 They exchange ages: he’s 42, she’s 24. After they have sex, they both agree it was “weird good,” and Joshua—not Josh, by the way—he BBQs up some steak for them.

While he’s cooking, Hannah asks Joshua about himself. He’s a doctor, separated from his wife who seemed to not want to move to NYC. But that’s about all she gets out of him before the hipsters next door start playing their damn reggae too loud. Joshua’s old, get it? He hates the kids and their damn mustaches. He’s like an “old ghost.”

Night falls, and Hannah thinks she should leave. Joshua wants her to stay, and she makes him beg. It’s a funny scene that turns sexy real quick.
Next morning, they both call off work and play topless ping pong. I know all you haters out there probably snicker at seeing Lena Dunham naked. But she is damn sexy. I wish I had the confidence to rock my nakedness the way she does.
After, Hannah gets in the shower that is bigger than my kitchen, I tell you. She turns on the steam room feature (so jealous) and passes out. Don’t worry, Joshua finds her.

They lie in bed, Hannah’s head resting in his lap, and she starts crying. Joshua is concerned; was it something he said?

“Don’t tell anyone,” Hannah tells him. “But I want to be happy.”

He doesn’t get it, but Hannah explains how she lives for experiences so other people don’t have to. “Something’s broken inside of me,” she says as she tells him she’s been this way all her life. She has always felt things for everyone else.

It’s a powerful scene. I think most of us can relate. Are you the friend who seems to feel everything for everyone? I’ve always felt like that at times, but I think we all want to be happy. And, yeah, it seems like a given, but is it? When you really think about it?

And Joshua is not into it. At all.
And Hannah can tell. She calls him out on it. “What’s your damage, Josh?” She asks. Taking in a girl off the street isn’t exactly normal. He does his best to avoid the conversation, and they go to bed.

Hannah wakes in the morning, and Joshua is gone. She has breakfast, reads the paper, takes out the trash, and leaves. 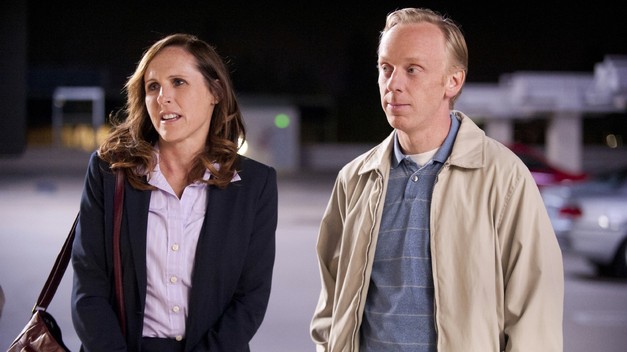 Enlightened
Episode 5:
The Ghost is Seen
This episode features not only narration by Tyler, but also some of the most awkward kissing I have ever seen.

“It’s okay to be a ghost,” Tyler narrates. “Slip in and out unseen...so little to hold you down...” He goes through his life, work, sitting at home alone, sad and pathetic. “Some pearls are never found...maybe there was a time I wanted to be found...”

At the office, Amy is on her usual “down with Abaddonn” kick. She accessed the company emails again, but none of them have the information she needs; they’re all too clean and formal.

Dougie brings the two of them into his office. The higher-ups have given him the runaround, and he hates being lied to. They brainstorm about how to get the incriminating emails.
Eventually, they wonder if Szidon’s assistant might have the information they need. Tyler mentions Szidon’s assistant works out at the company gym.

The assistant, Eileen, is played by the wonderful Molly Shannon. Tyler strikes up an awkward conversation with her while they’re on treadmills. Tyler gets scared and backs off, so the next day, Dougie takes over and asks Eileen out on a post-work outing. She agrees.

Of course it’s just Amy, Tyler and Dougie going out, but Eileen seems pleased that Tyler is part of the outing. At the bar, Amy tries to do her not so subtle thing, and Eileen wonders if she’s being set up. On a date, that is. Turns out she likes Tyler; she thinks he’s sweet. 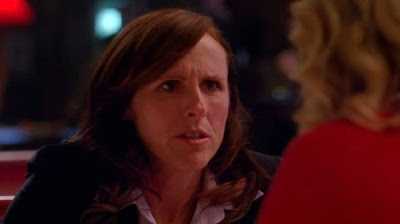 Eileen and Tyler have some small talk about music, being a “learned extrovert,” and going to therapy. Meanwhile, Amy and Dougie are rooting for Tyler from afar.

Afterwards, everyone says goodnight, and Tyler walks Eileen to her car. They make plans for tomorrow night, and hug and kiss so awkwardly it makes me cringe just thinking about it.

Next morning, Dougie is fired up. He wants to tell everyone in Cogentiva about what they’re up to. Amy advises against it. They start brainstorming again, how could they get to the CEO’s private emails. “What do they do in the movies?” Amy asks, then realizes. “They go through the vents!”
She also thinks of hiring someone to break in and steal Szidon’s hard drive. Tyler comes in and mentions he was going to give Eileen some of his music by logging onto the network and downloading it to her computer. That’s when Dougie and Amy both get light bulbs over their heads. While he’s doing that, they can get into her accounts. Tyler really doesn’t want to, but he does. (I get tired of writing lines like that)

Tyler goes up to Eileen’s office and puts music onto her computer as Dougie and Amy get the info they want. Amy is freaking stoked.

Later, Tyler and Eileen go to dinner. They talk a bit about former relationships and Tyler says he had a “relationship” with one of the girls from Abaddonn. But it was just a hook-up from what I could glean. Eileen says she got so caught up in her work that it felt like she was dating her boss. So, she goes to therapy now.

After dinner, they go back to Tyler’s place. God, to say that it’s terribly awkward would be a disservice to the word “awkward.” It was also kind of adorable in a way, too. Tyler asks her if she’d like to spend the night. “You seem sad and sweet, and I like that,” she tells him. But she’s afraid of getting hurt. Tyler doesn’t have it in him to be hurtful, I don’t think.
Anyhoo, they go to bed together. And of course Tyler wears tighty-whities. They kiss and I wanted to claw my eyes out it was so unbearably awkward and torturous and also adorable.

Next morning, Dougie is proud that Tyler got laid. Amy is over the moon because they got all the dirt on Szidon they need, all thanks to Tyler’s help. But he’s worried that this will hurt Eileen. Amy really doesn’t get it.

How great is it to have Molly Shannon back on our TV boxes???