TV You Should Be Watching: Banshee

It's been a while since I've done one of these. Last time I did, I think it was for Enlightened, which I've been covering--along with Girls--on a (usually) weekly basis. Once in a while a show comes along that really intrigues me. Right now, it's Banshee. Let's break it down:

The creators:
Banshee comes to us from authors David Schickler (“Kissing in Manhattan,” “Sweet and Vicious”) and Johnathan Tropper (“One Last Thing Before I Go,” “This is Where I Leave You”) and executive producer Alan Ball, who’s created two little shows known as Six Feet Under and True Blood.

I know what you're thinking: "Wait, Cinemax does original programming? Don’t they just show...you know...those kids of movies?" To which I say: grow up. It’s 2013. Cinemax has actually been making original programming for years now, including Strike Back and Hunted.

The ambiguous morals:
Everyone on this show is out to get someone else, so it’s hard to say who, exactly, are the “good guys.”

The story revolves around Banshee sheriff Lucas Hood—well, it’s not really Lucas Hood, but the man who assumed Hood’s identity when the real Hood died rather gruesomely. This man (Antony Starr) is an ex-con and thief who made enemies of some very bad people, including the Russian mob. Hood is the main character, sure, but is he the hero? The anti-hero? It’s hard to say, but I think that’s what makes him so interesting. In the guise of sheriff, he assumes the role of the “good guy” but does things in an...unconventional way. (See, for example, his “arrest” of a celebrity athlete.) Starr also brings a raw passion to the role that is both sexy and menacing.
Characters who at first seem obviously good turn out to be not so much. Anastasia (Ivana Milicevic), Hood’s lost love and literal partner in crime, now lives in Banshee as Carrie Hopewell. She’s also married to the DA and has two lovely children with him.
It all seems so very idyllic, until we find out her connections to the mob, specifically to Hood’s nemesis, Mr. Rabbit.

And then there’s Job (Hoon Lee). Who is he? Well, he’s the next reason to watch.

MOTHAFUCKIN JOB:
Ever wish someone would create a non-stereotypical GLBT character? Your wish is granted! Job is a ruthless hacker/forger who used to work with Hood and Ana back in the day. He’s also a gorgeous drag queen. 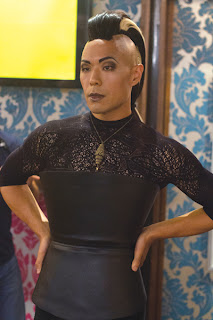 This aspect of his character is played matter of fact. It’s just part of who Job is. He likes wearing stilettos, dresses, Diane Von Furstenberg head scarves, and lipstick because that’s who he is. There’s no big hooplah about him being himself, probably because he’d kill anyone who’d say otherwise.
The setting:
I know this seems like an odd reason, but Banshee, PA is a small town in the middle of Amish country. It’s a setting that hasn’t been used that much recently (or, I should say, used well). It adds an interesting layer to the overall premise, especially since the main “villain” (again, ambiguous) Kai Proctor (Ulrich Thomsen) is an exiled member of the Amish community.
It’s damn violent. And sexy, too:
This show has some of the best/worst cringe-worthy fighting I’ve seen in a long time. It’s nice to see a show that just goes for it. Banshee also doesn’t shy away from the sex. I’d say the sex scenes are more realistic and less soap opera. I mean, aside from everyone being gorgeous, they know how to get it on!

Disclaimer: all photos are copyright their respective owners, I don't get paid for any of this. Although wouldn't that be awesome?!