Girls: A Real Case of the Whispers 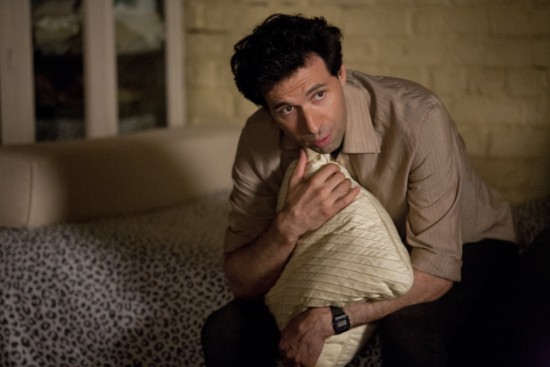 Stop. Just stop. Let me explain where I’m coming from. I’m the kind of person that loves a good relationship drama. I’ve watched Queer as Folk (US and UK) and The L Word (even the atrocious final season). I watch romantic comedies that don’t actively insult my intelligence (Celeste and Jesse Forever comes to mind). In certain parts of this episode, I felt like the show devolved into a sad parody of a Kate Hudson rom-com. Let’s just get to it, and we can say goodbye to this well-intentioned but seriously flawed finale.

So, Hannah’s still in her clothes (it’s really just a shirt) from last episode. She keeps hearing ringing in her ears, and decides to hop on Google. Anyone can tell you, especially Erin Gibson and Bryan Safi, to not Google it. Yet she does.
David, after swooning at Chloe Sevingy (“Only the rain has such hands...”), calls Hannah and tells it like it is. He wants her pages, they’ve already given her an advance, if they don’t get the pages they might sue her. She assures him he’s committed, that she’ll get the book to him soon.
Then she goes back to bed. “I’m gonna write a book in a day...” she muses. Spoiler alert: she doesn’t even come close. I’m sorry, I get what they’re trying to say about Hannah, but for fuck’s sake, why not write about all this shit she’s going through? Or would that be too easy?

Elsewhere, Charlie is going down on Marnie, and she’s loving it. Which of course makes her wonder how the hell he got so good at it. He must have been really slutting it up while they were broken up. Marnie, even while getting eaten out is still a jealous bitch.

In other awkward sex news, Ray is giving it to Shosh and she is not having any of it. Seriously, I think that in all of my awkward sexual experiences, I have never had that horrible look on my face. I make all my uncomfortable sex work. But enough about me.

What’s that, you say? You want more awkward sex? Well, have some Adam and Nat—who are shockingly still together after that whole crawling fiasco. They both seem into it, until Adam calls her a “whore” in a dirty, sexy way. To be fair, some people don’t like the dirty talk. I get that. But then she starts directing him and it loses all its appeal.

Hannah calls her dad and at first seems like she wants to ask to come home. But she instead asks him for money to pay back the advance for her book. He tells her that he’s tired of her manipulating him. She’s done it since high school. And no, they won’t be sending her money.

Next morning, Marnie and Charlie are having brunch at some trendy hipster joint. She starts talking about how they’ve reached the “end point,” and that their experiences together have made them ready to be “settled down.” Charlie gives her the “are you fucking kidding me” look. Marnie gets pissed (surprise, surprise), makes a scene, stomps out and POUTS as she walks away. If that doesn’t sum up everything I hate about her, I don’t know.
And so Charlie follows her, she whines about having the “worst year ever.” Here is where I grew concerned about this episode. Marnie walks away again, and Charlie chases after her. He starts rambling about how much he still loves her, and about how everything he’s done has been out of his love for her. So I guess they’re back together. Oh, and the music to this scene is by-the-book romantic comedy, as if it were trying to evoke“this is a touching scene,” but instead made me think “don’t worry that this scene doesn’t make any sense in the context of the entire series, the music is sweeping and romantic.”

Sorry Girls, but you can’t set up Charlie as an emotionally stunted brat—remember the whole diary incident from last season? I do—and that Marnie is just plain awful to everyone in her life, and then suddenly decide these two were meant for each other. In a certain light, maybe they are the perfect couple, because they are equally terrible human beings.

Oh, and Marnie says something about how this isn’t about money, since he’s all rich now. But you can tell it certainly doesn’t hurt, right?

Ray goes into Grumpy’s (the cafe) and talks to his boss, played by Colin Quinn. Why is it I have been more excited to see the guest stars this season (Quinn, John Cameron Mitchell, Carol Kane) than the actual cast? Ray’s ready to quit and go back to school full time, so he can make Shosh happy. Quinn retorts she doesn’t want a struggling grad student, she wants someone with money so she can buy more “purses shaped like different bread products.”

Then he makes Ray a counter-offer: he’s opening a new Grumpy’s in Brooklyn Heights, and wants Ray to be the manager. After some talk of titles, he takes it. Again, because that will make Shosh happy. Remember that.

Marnie pays Hannah a visit, but Hannah hides behind her bed.
Marnie notices her laptop still open on the bed; all it has is a document open with one sentence about college girls and romance. In other words: total bullshit. Marnie makes sure to take her menorah before she leaves.

With Marnie avoided, Hannah resumes doing nothing, eating cool whip and looking through magazines. Then she gets the amazing idea to cut her own hair. And she botches it. I guess this scene is supposed to be funny?
So who does Hannah call? Not Marnie, not Shosh, hell, not even Elijah. Laird. She calls Laird, her ex-druggie downstairs neighbor. You remember him, right? She used him for sex at the end of the cocaine episode.

He fixes her hair (sort of) and Hannah is moving around the room like an ancient grandma. It’s really pathetic. Then Hannah complains about how no one is there to help her, like when she was a kid. She collapses onto her living room nest, and Laird seems to want to help, because she looks like shit.

But then she says she doesn’t have the energy to “fight him off.” And that squelches any help she’d actually get from him. Laird tells it like it is. Hannah is self-important and has “rotten insides.” Yeah, I’d agree with that.

Thank goodness for small miracles. Ray and Shosh break up. But not before they have an argument. Well, it’s more like Shosh talking at Ray about how she pities him and that he hates everything, and that she “can’t be the only thing that [he] likes.” She suggests he get therapy and maybe they can get back together after she’s had her “personal Reniassance.” (I literally winced at that statement.)
Ray turns the tables and says it’s Shosh that needs to fucking change. Truth hurts. For as cute as everyone finds her, I think Shosh is overbearing and almost insufferable. She needs a wake-up call.

Over at Hannah’s hoarder den, she gives Jessa a call and leaves an angry voicemail. So that happened. But really, what’s the point of having Jessa as a character if she’s not even in half the episodes? Hopefully that will change in season three. This scene also made me realize that Hannah stopped being a kindred spirit and has now become the person I never want to be.

Meanwhile, Adam fucks up his art and smashes it all when he get a video call from Hannah. At first he doesn’t care, but she absolutely manipulates him into RUNNING ACROSS NYC WITHOUT A SHIRT ON. He finally gets to her apartment, breaks down the door (because she really doesn’t want him to be there, so she doesn’t open the door...right) and takes her in his sweaty arms. All the while, romantic bullshit music plays on. The end.
I’ve watched a lot of tv. And I’ve put up with a lot of bullshit on my favorite shows. (Dana dying on The L Word, Nikki and Paolo on Lost, whatever the last episodes of Veronica Mars were even about) This season of Girls started out with real promise. It’s disheartening to see these characters portrayed in such a weak-willed manner. Was I supposed to feel touched when Charlie professed his love to Marnie? Was I supposed to take Adam’s puppy-dog devotion to Hannah as charming? Or was that the point? Was it supposed to read as false? I can only hope the show finds its way next year.

But it's not all bad news! Come April, we'll be bringing you some extra special recaps of everyone's favorite show about tits and violence: