Arya—She tries to smash the Hound’s head in with a rock, but thinks better of it when he wakes up. 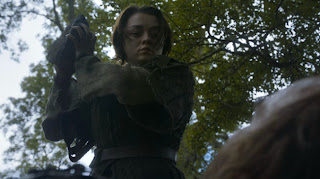 They travel on, and Arya is confused as to where they’re going. King’s Landing? Turns out the Hound has had it with the Lannisters, and he plans to ransom Arya off to her brother Robb. They make for the Twins (home of the Frey’s) and the looming wedding.

King’s Landing—Hoo boy, lots happens here. First up, Sansa and Tyrion talk wedding. And Tyrion is awkward and adorable about the whole thing. They have some wine—a recurring motif in this episode.

As people gather for the wedding Margaery chats up Cersei. And Cersei gives her a long-winded talk about old stories and if she calls her sister again, she’ll kill her. Way to bury the lead, Cersei.
The time comes and Joffrey escorts Sansa down the aisle—making sure to mention her father isn’t there to give her away. What a dick. So, it’s tradition for the groom to fit a cloak over the bride’s shoulders. Of course Joffrey takes away Tyrion’s stepladder, so he must ask Sansa to bend down to complete the ceremony. 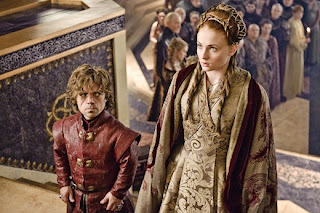 (Oh, and the entire audience laughs until Tywin turns to look at them.)


At the reception, Olenna talks to Marg and Loras about how the families will be related now, and leaves everyone more confused than they were before. Loras tries to chat with Cersei about their impending nuptials, but she’s not having it. 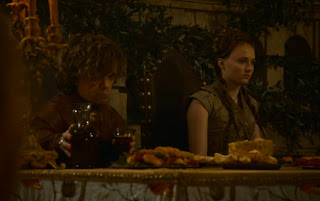 Meanwhile, Tyrion continues to get drunk as Sansa quietly shuffles away. Tywin stops by to tell Tyrion to hurry up and get Sansa heavy with child. Then Joffrey, being creepy as usual, tells Sansa that if Tyrion can’t get her pregnant, than he certainly will. Ugh, he’s so fucking gross.

He then goes over to Tyrion and requests that he and Sansa get on with the bedding ceremony. (In the novel, the bedding ceremony involves the wedding party stripping the bride and groom naked and escorting them to the bedchamber.) Tyrion refuses along with some choice words for Joffrey.
Sansa and Tyrion do eventually make it to their bedchamber, but neither of them are really in the mood. Well, really, Sansa wants nothing to do with him, and Tyrion has too much respect for her—or standards, or morals, something—to do anything but pass out on the couch.
Next morning, Shae cleans their room, and discovers the bedsheets are clean of any sex filth. She smiles to herself. Really, though, I couldn’t care less, girl.

Daenerys—Last episode, the lord of Yunkai mentioned having “powerful friends.” Those happen to be a mercenary group known as the Second Sons. She meets with their leaders, Mero (a real classy motherfucker), Ghzen (just there for some reason) and Daario (sort of a Legolas type, at least in the hair and frame).
They banter, Dany offers to buy their allegiance and here have some wine to think it over.

The Second Sons hatch a plan to assassinate Dany. Apparently Mero doesn’t like strong female characters. They draw lots and Daario is tasked with the dirty deed.

He disguises himself as an Unsullied and sneaks into Dany’s tent, as she and Missandei are discussing languages. Oh, and Dany is in the tub. Naked. But there’s a twist; Daario turned against his fellow leaders and offers their heads as a show of his allegiance to Dany. 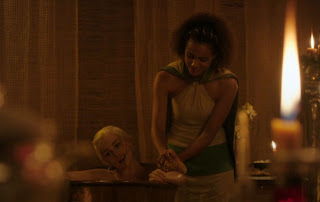 And in the best “Yeah, I’m naked and you like what you see. So fucking what?” Dany gets out of the tub and makes him kneel and swear his loyalty to her.

Storm’s End—Gendry and Melisandre make it back to Stannis’ homeland. He greets Gendry awkwardly. Why not just kill him and be done with it? He asks Mel when Gendry is elsewhere. She likens the young man to a lamb; best to keep him around, unsuspecting till the time comes.

Meanwhile, Davos is still in a cell, still learning to read—and getting better at it, I should add. Stannis pays him a visit, and fills him in about Gendry. Davos lets him know his reservations about the whole ordeal. And knows that Stannis has the same reservations, too. Which is why he releases Davos from his imprisonment, to serve as his advisor.

Now it’s time for the an installment of “I didn’t realize he was hot till he took his clothes off.” Melisandre has Gendry all alone, spews some Lord of Light poppycock, takes his clothes off—and I find it surprising he’s found the time to shave his chest but not his face—ties him to the bed, rides him for a bit, then grabs some leeches and places them on, let’s say “strategic” places on Gendry’s naked torso.
Cue Stannis and Davos, who both seem kind of confused as to what is going on. Mel gives the leeches filled with Gendry’s blood (remember he’s the son of Robert Baratheon) to Stannis; he sets them ablaze, giving each one an enemy’s name.

Sam—He and Gilly (and her baby boy) continue their journey through the cold. They rest at an abandoned shack. Outside is an old godswood tree, quickly filling up with crows. But Sam takes no mind of it. In the cabin, he realizes that he’s so much smarter than Gilly. Don’t you hate when that happens? You’re smitten with someone, then you realize they’re dumb as a stone. But he doesn’t care. They chat about what to name Gilly’s son, when they hear a disturbance outside.

Turns out the godswood is filled on every branch with crows. Almost as if they’re waiting for something...

A White Walker—the very same one that Sam saw last season?--emerges from the forest, looking for the child that Craster promised it. Sam does his best to scare it off, but the Walker shatters his sword. As the monster closes in on Gilly, Sam stabs it with his dragonglass blade, which seems to have the effect silver does to werewolves. The White Walker crumbles to pieces in the snow. Sam and Gilly run off into the night.