Guest Writer: Another Take on "Game of Thrones"

This guest writer is Taylor Birk, from Edinboro, PA. YES, I know "Game of Thrones" has been an ever-popular topic on here. But have at someone else's opinion. Thanks Taylor! 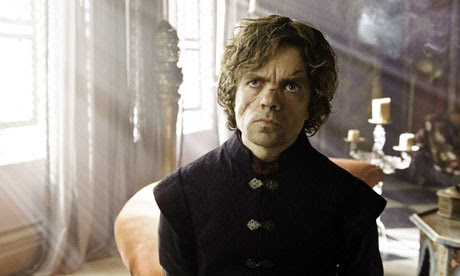 Painful. That’s the first word that comes to mind when I think of the third season of "Game of Thrones." It’s painful for the characters (quite literally) and painful for me (figuratively and literally). So much of this season left me, and many others, to weep into a pillow at night. And not just because of some of the traumatic events that took place in Westeros this season. Seriously. Some of those torture scenes left me in a severe amount of (psychosomatic) pain.
I was late to get on the "Game of Thrones" train. A friend and I sat and watched the entire first and second season in a span of two weeks so we could watch the third season when it started. I regret not watching the show sooner, but better late than never.
I think this was a fantastic season. Although there were some really painful moments (I’m thinking about episode nine at the moment), there were some seriously epic moments to counteract the bad.
I’m talking specifically about Daenerys. Dany started off as such a timid character in the first season. But since then she has really grown into such a powerhouse. Not only did she gain an entire army, but she’s also earned the respect of countless slaves and she has some pretty adorable (and frightening) dragons in her care.
My only worry is that she’s eventually going to get a little too big for her britches. She pulled some pretty dangerous moves this season, like when she refused the offer given to her by the people of Yunkai. I know she’s just showing off her new found bad-assery and power, but stuff like that will put a price on your head in the Game of Thrones. It would break my heart to see something like that happen to her.
Now, Tyrion’s storyline this season absolutely killed me. I’m a huge shipper of Tyrion and Shae. Their relationship is adorable and I was devastated when he was forced into marrying Sansa, even though I like her. I just didn’t want the two to actually get married because it blew a serious hole in my ship. I am, however, pleased with recent developments in the season finale, but I worry that it will only cause problems for Tyrion and Shae in the long run. I will die (probably literally) if anything happens to those two.
I’d like to take a moment to say something about Joffery. He is an absolute loon. I’ve disliked his character from the beginning of season one and I continue to dislike him at the end of this season. I would like to commend Jack Gleeson, however, on his portrayal of the sadistic king (I still can’t get over what he did to Ros with the crossbow). He plays the part so well that I just love to hate him. I was hoping to see his demise this season, but all in good time.
Speaking of people that I love to hate, Jaime Lannister really threw me for a loop this season. I wouldn’t say that I hated him, but I didn’t particularly care for him (especially when he pushed Bran out a window in season one). His character has developed nicely this season and I love the attraction that is present between him and Brianne. I think it’s going to create amazing tension for next season, especially since they are back at King’s Landing and Cersei will be in the mix again.
Other parts of the storyline this season were a bit slow moving, like Bran’s part. It’s great that he’s having visions, but I didn’t find his story to be very compelling. I found myself focusing more on the fact that his companion, Jojen, is the little boy from Love Actually all grown up. I’m hoping that it will improve in the upcoming season because I think it has a lot of potential.
I could sit and talk about this show for hours and hours (and I do, in fact, with some of my friends), but I don’t want to get too in depth about the season. I certainly don’t want to give anything away for anyone who wants to watch it.
To put it simply, it was a fantastic season. After watching all three seasons in a row, I would say that the seasons just keep getting better. There’s the perfect amount of drama covered in large amount of pain and feels for the viewers. It’s a perfect balance. I can’t wait to see what’s in store for next season.


What can I do until then? Start the book series, of course! I’m unfortunately behind the times on that as well. Hopefully the books will be able to satiate me until the start of the fourth season. Until then, I’ll just cry over all the painful memories of this epic and satisfying season.