Remembering "That Thing You Do!": Someone From Erie Tells It


I love "That Thing You Do!" A lot of people do. I don't know this because I have asked many people but because Rotten Tomatoes tells me so. 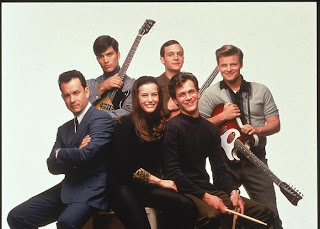 Now I remember when this was being filmed, it was a HUGE deal because it was set in Erie and I'm not sure there has been another major film set in Erie. It was really random to me, because why would you set a movie in Erie if it wasn't a true story?

While Tom Hanks chose to make Erie part of the nexus of his love letter to the glory days of rock and roll (yeah yeah yeah!), he did not really film it there. They stopped up by Mercyhurst briefly (near my parents' home FYI) to take some exterior shots and, well, that was that.

Now I understand the impetus behind this decision, as well as Hanks' concept to shoot it in Orange County California. I remember this because the Erie Times News discussed this and I read the article, nearly 20 years ago now (ahhhh I was like eight okay so I'm still kind of young). Regardless, I still wish he had shot some of it in the actual city. It could have done great things for Erie! It could have started a trend!


A lot of times I have told people "I'm from Erie, PA." And they are like "OMG I LOVE 'THAT THING YOU DO!'" The cast is amazing; the music fantastic. The style? Nicely mod. It's a good film.

Someday, when I make my Natalie Wood biopic with Mila Kunis, I will FILM ALL OF IT in Erie. Get ready, Erie's economy. I'm going to pump you full of gold.

Anyway: The point of this point is "That Thing You Do!" was a good movie set in Erie (partially albeit) that should have been filmed there! Granted, Erie has shit weather. If you've never seen this movie- see it! For the love of God, you have no excuse. It's 17 years old now.