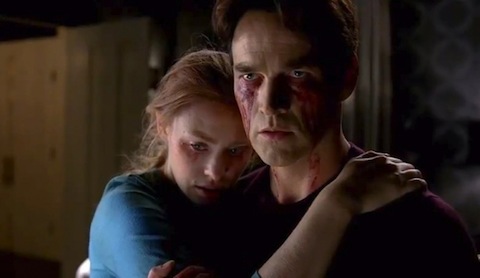 Sorry these recaps have been so late. I've been a busy little bee. Moving to Chicago in the fall and putting things in order has taken priority. At least for the next few weeks these recaps should be on time. Come August I can't promise anything. But in any case, let's see if this episode succeeds where the premiere did not in being nominally entertaining.

The Stackhouses—So Warlow is on the loose, tearing through a hole in the universe—a universe where everyone dresses like Rob Zombie, apparently—and steps into ours.
But Sookie don’t care, she’s sleeping. Oversleeping, in fact. Arlene calls from Merlotte’s and tells her to get her ass in gear. (More on the Merlotte’s crowd later)

And because it’s Sookie, she’s on her way to work when she comes upon a conveniently injured and sexy man on the side of the road. I mean, what a coincidence, yeah? She just happens to find an ailing halfling (like herself) in need of her help? Color me skeptical, especially after Rob Zombie’s dad just showed up from another dimension.

So naturally she takes him home and patches him up. Turns out he was attacked by a vampire, but he zapped him with his faerie powers. Sparks fly—literally—when she touches him. He makes to leave, but out of the kindness of her heart, Sookie decides to escort him to the godawful faerie burlesque house. When you’re in the South, always depend on the kindness of halfling fae. Oh, and the mystery fae is named Ben. How banal!
They chat along the way, and Ben blatantly suggests taking her out on a date to thank her. He also catches a glimpse into Sookie’s brain, where she’s thinking about Bill (of course she is). This prompts her to go back home, because, let’s face it, she is never going back to work again at this rate. I miss the earlier seasons with her and Arlene and Sam bickering.

When she gets home, she finds Jason and her “faerie grandfather” are already there.

So when we last left Jason, he had encountered a strange old man that he took for Warlow. Again, Jason is wrong about everything. Turns out this man is his faerie grandfather, Niall. Turns out that he’s in town to find the Stackhouses and help them fight Warlow.

They go to Sookie’s house, where Warlow first appeared in Sookie’s bathroom. Niall finds the dimensional portal and flings himself in. Jason tries the same, but just runs into the wall. Niall falls on top of him, covered in Poltergeist-esque goo. It seems Warlow is on the loose.

Niall explains everything to Sookie and Jason over dinner. Seems the Stackhouse clan is the oldest fae bloodline in existence, and Warlow has a mad-on for it. Oh, and Sookie and Jason are fae royalty. Because sure why the fuck not?

And how does one defeat a vampire as old as Warlow? With a super-secret deus ex machina, of course! This magic fireball can be used only once, and if Sookie uses it, she’ll lose all her fae powers. Sounds like a fair trade, right?
Sorry, but how much exposition do we need in one episode? And, really, I’m not buying this whole “ultra super duper faerie fireball” crap. It’s not going to work. I’m calling that now.

Oh, and do you love how Sookie is no longer dead to Jason after a day? That Jason, dumb as a box of hammers but so easy on the eyes. And plenty forgetful.

Bill and Jessica—He spends most of his time freaking out with crazy visions, then slips into a coma, with Jessica doting on him. In his mind, Bill is escorted by the merkin sisters to the merkin queen, Lilith, whose absolutely ridiculous vagina wig is prominent even through her dress.
Lilith tells Bill that he is the chosen one, yadda yadda, and a tyrant will rise, blah blah, you’re not a god but you’re pretty damn close oh and you will be the savior.

During all these boring visions, Jess is having her own freakout; it also brings the best part of this episode. Bill looks dead (well more dead than usual), so Jess orders him a meal from “Human Edibles.” Still Bill is unresponsive, so the blood hooker goes to leave, and that’s when things get amazing.

Some strange power contorts the hooker over to Bill (and it looks painful), where she opens wide and all her blood flows from her mouth to Bill’s.
After Jessica does some late-night gardening—I hear dead hooker is a great fertilizer—she prays to god to watch over her friends. If this were any other show, that might work. It’s also a great performance by Deborah Ann Woll. 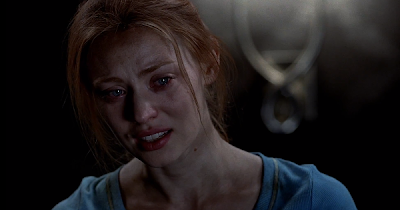 Bill wakes up and learns that he can gaze into the future, and all he sees are his friends burning. Thanks, Lilith!

Terry & Arlene & Andy—These three don’t have much to do, but they make the most of it. Arlene and Terry lie to Patrick’s pregnant wife. You remember Patrick, Terry’s psycho war buddy. He’s totally dead, but they don’t tell his wife that. Arlene spins an impressive yarn about him running off with another woman.

Arlene also seats a group of annoying pro-vampire kids and makes a joke about organic foods and organ-playing that made me literally laugh out loud.

Andy takes his fast-growing kids to the field where the underwhelming faerie burlesque house resides. He calls out to his faerie babymama to no avail. Poor guy.
Eric, Pam & the rest—Tara has been shot and is screaming on the bar when Eric and Nora show up to Fangtasia. Eric digs the offending bullet out—a nasty combo of silver and ultraviolet light—with a broken bottle. Looks like the humans are getting better at finding ways to kill vamps.

While Nora researches Bill’s condition in the vampire bible, Eric goes to spy on Governor Burell, who I mistakenly said was the mayor last week. My bad.

Eric disguises himself as a representative of the Fish and Wildlife council—okay, he kills the real representative—then gives himself a silly Clark Kent makeover. After Burell’s repressed daughter, Willa, leaves, he has his face-to-face with the governor.
They squabble about whooping cranes and vampire rights before Eric puts the old glamour on Burell...or not. As luck would have it, they’ve developed contact lenses that prevent any such fuckery. Armed guards escort Eric outside to a truck on its way to “the camp.” Doesn’t sound pleasant. Eric easily flies away, but not before stopping by Willa’s window. She’s taken her contacts out, the dumb thing, and is dressed for bed like an extra from Coppola’s Dracula. Total vampire-bait.

Sam—While Lafayette and Emma play dress-up in Sam’s trailer, Sam himself has an encounter with Nicole, a pro-vampire advocate. She wants him to come out as a shifter, but Sam is reluctant. Nicole goes into this diatribe about civil rights, and comes off less well-intentioned and more annoying as fuck. I didn’t like her the second I saw her.

She strikes me as a blatant attempt at a “strong female character” that falls flat. It’s easy for her to push people to “come out” because she doesn’t have to come out as anything. At the end of the day, it’s not her life on the line, it’s Sam’s. Okay, rant over.
Later, there’s trouble at Merlotte’s. I mean, when isn't there? Am I right? Alcide, Martha (aka Bonnie Raittwolf), and Danielle come by looking for Emma. I notice that Alcide's #1 bitch, Ricky, is conspicuously absent. I wonder if that's a plot device or merely a casting choice.
Long story short, the weres wind up beating the crap out of Lafayette and Sam and take Emma with them.

So, how did this episode do? I think it was definitely better than last week (but that wasn't hard). Does it seem a little too coincidental that Ben shows up soon after Warlow makes his debut? I smell a rat. Either Ben is Warlow, or Ben's working for him. Something like that.

This season has a lot of potential. But then again so did last season, and we all know how well that turned out. Fingers crossed.

Oh hey, and next week you'll have twice the me to go around since Dexter is back for its final, merciful season.