Dexter: Exactly What You Need To Be 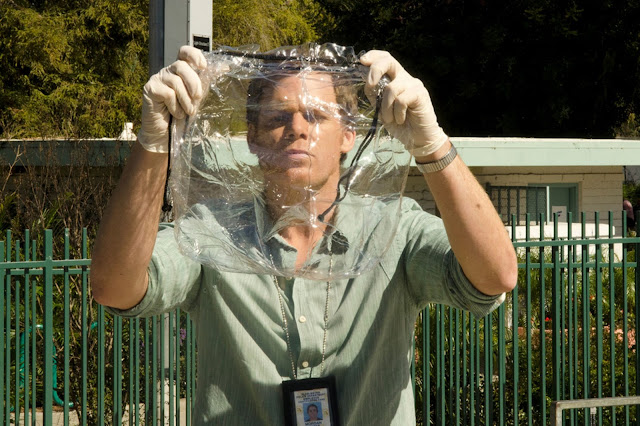 Sorry for the lateness of this recap. Did I mention I’ll be moving to Chicago in about a month?! Crazy stuff. Oh, and I made scrambled eggs this morning and didn’t burn the house down! Hooray for me!

Anyhoo, let’s get to things. The plot gets a bit twisty this episode, and it was a pain to scribble notes for. A lot of good dialogue and character development.

Vogel shows Dex some of her old psych recordings of her sessions with Harry (aka Ghost Dad). One involves a young Dex asking dad to see a crime scene. And Dex took a bloody piece of glass from said crime scene.
Dex is disturbed by their frank discussion of him. Vogel says she helped Harry help Dex focus his psychopathic urges. She thinks of herself as a spiritual mother to Dex; it’s like a family reunion. Sure it is.

Dex wonders why she’s so invested in him. He got under her skin, she says. And in that way she came to care for him. And she even saved his life, in a way. Now she wants him to return the favor.

Vogel shows him a jar containing the same part of the brain as the victim in the current case. It’s the exact part, in fact; the killer left it on her doorstep. A sick kind of gift. Vogel suspects it’s one of her former patients. She implores Dexter to help her catch the killer on their own. 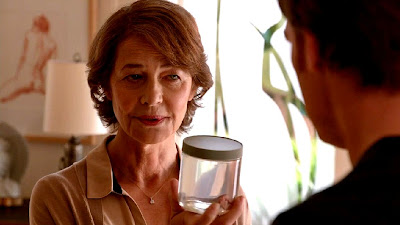 But Dex is still hesitant. As incentive, she offers him another dvd of her sessions with Harry to help him get some perspective.

Later, Dex watches the dvd. It’s of a later session where Dexter is full-on serial killing other bad guys. And when he started showing his victims photos of their victims. Seems like he’s embracing the process, we hear Vogel say off-camera.

Ghost dad pops in for a second. Maybe he does owe Vogel? If anything, keep her close, as the old saying goes. And Dex says “maybe I should listen to you.” Oh, so you’ve waited till the final season to finally take your ghost daddy’s advice? 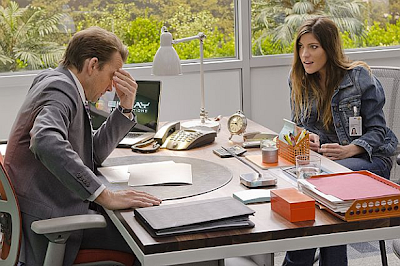 Deb gets a stern talking-to from her boss, Elway. He seems pissed she let her target get murdered, that and the sex thing. She claims she was “improvising” until she could get a lead on where Briggs stashed the stolen jewels. And she did. She plops the keys on the table. 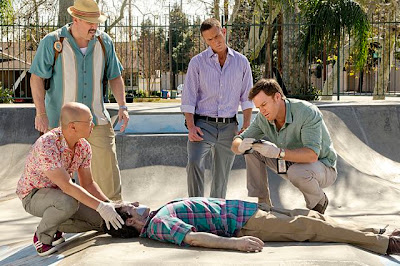 Elsewhere, Dex and Miami Metro have another crime scene. Another “Brain Surgeon” killing. Dex finds the murder weapon nearby. Vogel shows up as well. She received another “present.” Does she feel guilty for her actions, Dex wonders. No, she feels pride in how she helped Dexter; he’s making the world a better place. Dex asks Vogel how she and Harry met. He was familiar with her non-traditional approach toward psychopaths, and she didn’t judge.

Deb and Elway snoop around Briggs’ house, where they find a bill for a storage company, and a match to the key on his keychain. Elway has other business, so Deb decides to investigate it herself. Elway is concerned about her going alone, but not concerned enough to go with, apparently.

At Miami Metro, Dex and Vogel find a fingerprint on the plastic bag and get a name: Lyle Sussman. Vogel doesn’t recognize the name as one of her patients, but Dex figures it’s an admirer. He also wonders why he doesn’t remember Vogel from his childhood. Simple answer, Vogel says. Harry forbade them from meeting. Dex says he would have appreciated someone to talk to. Matsuka pops his head in to say he also got a partial print as well. He and Vogel keep quiet about their discovery.

As Dex goes to hunt Sussman, Vogel tells him something interesting: she thinks his desire to talk is strange, since most psychopaths don’t need an emotional connection.

At Sussman’s house, Dex finds little other than a picture of a hunting cabin. He snatches the picture just as Angel gets there.

Meanwhile, Deb is on the hunt for some stolen jewels. She finds them in Briggs’ storage locker. But El Sapo has been following her all this time. He grabs the jewels—and Deb’s gun—and kick’s Deb’s ass (well technically her ribs and stomach).

The next day, Angel and Quinn pay Sussman’s mother a visit. Befor that, Angel lets Quinn know that he knows about him and Jamie. He’s a detective, after all. But he wants Quinn to earn his respect, and taking the police sergeant’s test is a good place to start.

Sussman’s mom offers little information, aside from the fact that her son has a hunting cabin somewhere and she has a horrifying animal fur quilt. Before they can question her further, they get another call.

Dex arrives at El Sapo’s crime scene. Looks like someone executed him in his car before he could pull his gun. Dex finds some bloody glass that couldn’t have been El Sapo’s blood, so he pockets it. Matsuka finds a second gun in the glove box.

Dex calls Vogel to let her know he’s holding off on Sussman so he can check on Deb. He’s worried that El Sapo or his people might have killed her. But he finds Deb on her couch, asleep in a drunken stupor.

She wakes up and isn’t really surprised by the news of El Sapo’s death. Dex notices the bruising on her side, and she tells him what he needs to know. And then not so politely asks him to get the fuck out. Oh, and stop giving a shit about her life.

Later that evening, Dex finds Sussman’s cabin. Lots of hunting tools and paraphernalia on the walls and table. Out back Dex finds a disturbing discovery: Sussman’s been murdered.

He goes to Vogel’s and admits he was wrong; Sussman was just an accomplice. Then Vogel goes into some heady philosophical shit about how psychopaths are like alpha wolves. They help humanity remain civilized, and how CEOs and politicians have psychopathic traits. A cute dig at those professions? Or is there actually some truth to it? Vogel asks him about Deb, but he won’t talk about her.

In more boring news, Quinn and Jamie have an argument over Deb and Quinn wonders if the constant harping is a “Cuban thing.” Just keep digging that hole, fuckface. 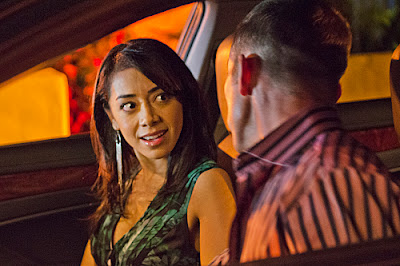 The next day at Miami Metro, Dex gets the blood results from the stolen bloody glass. It’s Debra’s (surprise, surprise). Just as that’s happening, Deb shows up. And the girl just looks defeated. She’s helping Quinn out with the Briggs/El Sapo case when Dexter pulls her out of the interview room.

Outside, Dex tells her he knows that she killed El Sapo. Deb says it’s all a blur—oh, and that’s totally her gun they found in the glove box. Just switch it out, brother dear. 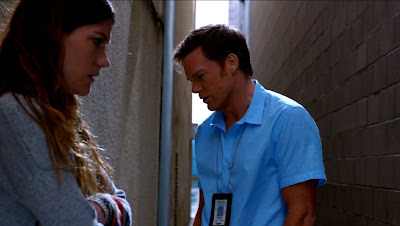 Dex wonders what if he wasn’t there to cover up her mistakes. Deb counters with a few of her own “what ifs” before leaving. Guys, I don’t like this joyless, dead inside Deb. Oh, and Dex does switch out the gun, cause he’s a pushover. And a secret serial killer.

He gets a call from Vogel; someone’s broken in to her house. Dex arrives, but there’s no intruder inside. There is, however, a dvd on the table. They play it, and it’s a film of Sussman being coerced into killing the latest victim.

Dexter has a small crisis of character. All he’s good for is killing and destroying lives, like he done with Deb. Vogel comforts him, much like a mother would a son. 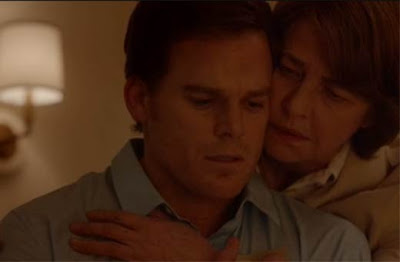 So what does everyone think? Is Vogel just messing with him? It would seem that she’s connected to these murders in some way, but how much?