Dexter: Perfect At One Thing 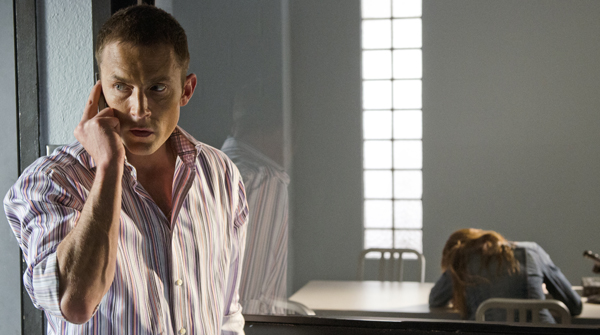 Dexter wakes up in the middle of the night to Harrison’s cries. At first it seems like a dream; Dex follows red splotches on the floor to the bathroom. He instead finds Harrison on the bathroom floor, an empty box of cherry popsicles beside him.

Instead of making the kid puke it up, Dex gives him a shot of pepto and sends him to bed. The very thought of all that sugar and red 40 makes me want to puke just thinking about it. 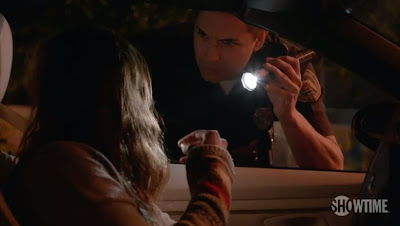 Elsewhere, Deb gets taken into the police station for an almost-DUI. She also wrecked a parking meter with her car. And who does she call? Not Dexter, not Elway, no she calls fucking Quinn, who is asleep with Jamie when she calls. He makes an excuse of “police stuff” and runs to Deb’s rescue.

Next morning, Dex and Miami Metro investigate the backwoods cabin (that Dex already discovered last ep). Instead of finding the body of supposed killer Sussman on meat hooks, they find him with a hole in his head on the floor of the cabin. Looks like he committed shotgun suicide. But Dex knows better. This is just the real killer covering their tracks. 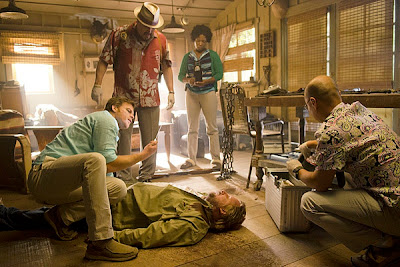 While everyone else is at the crime scene, Quinn drives Deb to work. He’s worried about her and she snaps at him. He also relates her current bender to his downward spiral when she dumped him. Alright Dexter writers, I see what you’re doing here. Stop. Stop trying to make Quinn a likable character. I’ve invested too much into hating him these past few seasons for you to try and change things up now.

Vogel gets a creepy text message to “look outside.” Seeing no one outside, she opens her door to find two neatly wrapped presents, with “his” and “hers” tags on each, respectively. No surprise that there’s brain bits inside. 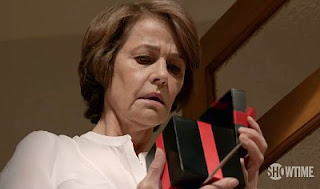 She joins Dex at the crime scene—she was going there anyway—and shows Dex the bits of occipital lobe. The killer’s clever way of telling them both that he (or she) is watching. Dex has also been doing research on all of Vogel’s former patients, and may have found one that fits the criteria for the Brain Surgeon. Ron G, who had strangled his best friend, but he lied to Vogel during his treatment. Basically she’s responsible for sending him to prison for several years. But he’s out now.

Quinn finally shows up to the crime scene, much to Angel’s dismay. But Quinn don’t care, he more concerned with Deb. He tells Dex about Deb’s decline, and Dex goes to pay her a visit at work. But not before Vogel can question Dex about his relationship with his sister. He tells her that Deb knows everything about him, and that it’s eating away at her. Vogel is surprised that he cares so much, what with him being a psychopath and all.

Deb and Elway have an interview with a new client, a, blonde cougar who wants them to spy on her cheating ex. Deb is maudlin and doesn’t really care, but Elway charms the client.

Dex shows up—of course—and asks Deb out to dinner. She reluctantly accepts, if only because it will get him out of her office. I should also note that Deb has been wearing the same clothes for at least the last episode.

Later at Miami Metro, Angel goes over the current cases. The Brain Surgeon case is closed following the suicide of the killer, and the El Sapo case is effectively done, with no witnesses and Dex having switched out Deb’s gun so she won’t be incriminated. While Dex searches for Ron, Vogel’s former patient, on his fancy phone, Angel talks to Matthews about making Quinn sergeant. If Matthews had been drinking when Angel said that, it would have been a great spit-take. 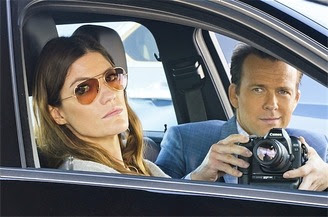 Meanwhile, Deb and Elway do surveillance for their new client. They find her husband screwing a girl in his truck and snap some photos. To pass the time, Elway chats Deb up about Quinn. She gives him the details, and Elway finds it odd that the two of them are still friends after it all.

Dex stalkes Ron at his job in the mall. He’s one of those fitness guys trying to sell people ridiculous exercise machines. Dex narrates, is he sizing me up? Does he want my brain? No, Dex, I think he wants your D, not your brain. Dex even baits him by talking about Vogel’s book, but Ron doesn’t take it.

After his casual encounter with Ron, Dex goes to Vogel’s to give her the scoop. He’s going to break into Ron’s place soon to get more info.

The two of them chat more about Dexter’s nature. She asks why he didn’t kill Deb after she found out. After all, the first rule of the code is “don’t get caught.” Dex says it’s because he loves Deb. When Vogel asks for specifics—what do you love about her?—he says it’s because she’s always there for him. And that’s why he wants to be there for her, too.

But Vogel says it’s not a good idea. He loves Deb because of what she can do for Dex. Him trying to help Deb is like “Michaelangelo trying to play the Banjo...you can’t be the cause and the solution.” She offers to help Deb herself, but Dex refuses. 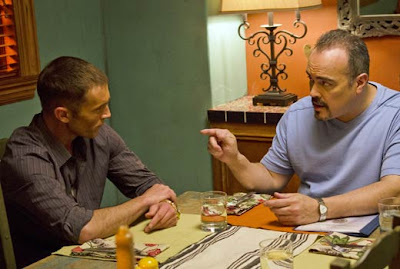 Elsewhere, Angel helps Quinn cram for the sergeant’s exam over dinner with Jamie. She mentions that case they had to take real late at night, and Angel is confused. What case?Quinn tells Jamie that he went to help Deb, and you can probably guess her reaction.

At the Morgan family dinner, Dex tries to make Deb remember what a good person she is, citing her daring apprehension of a killer in an earlier season. He solidifies this point by alerting her presence to one of the people she saved that day at a table nearby. 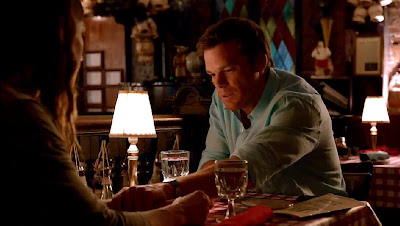 Later Dex breaks into Ron’s place, and while he doesn’t find the Brain Surgeon as he’d hoped, he finds a cannibal fitness expert with human parts in the freezer and a marinating brain in the fridge.

Deb and Elway show the incriminating photos to their client, who denies that it’s her husband. Later, Deb wallows in yet more booze, watching that video of her over and over and she somehow finds herself in the elevator of Miami Metro. 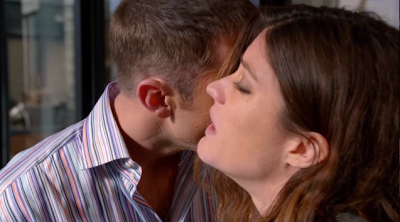 She stumbles over to Quinn, and tells him that she wants to confess. She killed LaGuerta. He sneaks her into the interview room, and she’s not making any sense. Quinn tries to get her to remember that she wasn’t even there, that Estrada killed LaGuerta. Deb’s sobbing and going off the deep end. While she scribbles down her confession, Quinn calls Dex.

Dex and Vogel are going over more suspects when Quinn calls. Dex goes to leave, but Vogel goes with him, wanting to help. Plus, she doesn’t think Dex realizes that Deb sacrificed everything to help him.

At the station, Vogel spins a story about PTSD and suvivor’s guilt to allay Quinn’s fears. Leaving Quinn outside, Vogel and Dex try to reason with Deb, but she is freaking out. Falling back on his instincts, Dex injects Deb with tranquilizer (“Well, that was interesting,” Vogel quips.) and carries Deb out of Miami Metro with help from Quinn of all people. 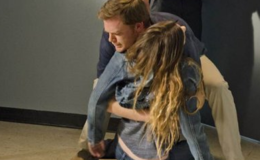 They take Deb back to her place. Vogel insists she stay with Deb alone, to see if she can get through to her. Dex handcuffs Deb to the couch, you know, just in case. Dex leaves Vogel with Deb, seeing as how he has somewhere else to be.

And in what seems like forever, we finally get to see Dex kill someone! It’s cannibal Ron.

Till next week, folks! In the meantime, enjoy this wtf pic of Jamie and Harrison. 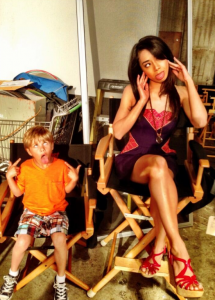