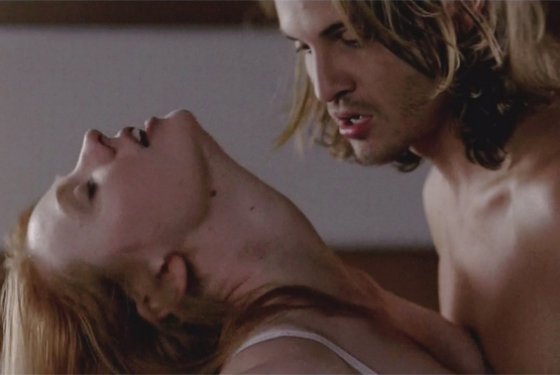 Episode 7
In The Evening
Sookie—In post-coital faerieland, Sookie and Warlow bask in the soft focus afterglow. Until Warlow ruins everything by getting all “me man, you woman, traditional genders roles good.” 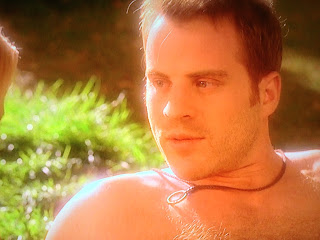 Sookie is about to go all suffragette on him when she hears a voice on the other side—Arlene’s. Knowing Bill will just summon him again once he’s in the harsh light of the real world, Warlow opts to stay put. Sookie uses her fae light (ugh) to teleport back.

Arlene is in the cemetery, reeling from the loss of Terry last episode. Did they put him in the ground awful fast? I don’t know how much time has passed between episodes. 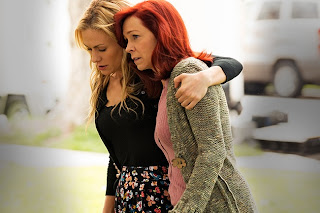 Anyway, Sookie finds Arlene, and it is fucking heartbreaking. I was worried it would be over the top, but Carrie Preston gives a fantastic performance. This scene also harkens back to earlier seasons, when Sookie was actually involved in other people’s lives.

She takes Arlene back home, where Andy, Holly and Lafayette are waiting. Arlene lashes out at Lala for his phone call, but she’s just angry. While she goes to talk to her kids, Sookie and Lala go investigate the security deposit box key that Terry gave to Lala.

At the bank, all they find in the deposit box is a life insurance policy—for 2 million dollars—activated three days ago. The mystery deepens. For them, not us. We fortunately know what the hell is going on.

Back at the house, Arlene is drunk as a skunk and in no state to deal with things. Sookie meets Andy’s daughter Adeline, who in turn meets Holly’s suddenly sexy sons, Wayde and Rocky. Things seem nice enough, until Bill comes strolling in in the middle of the day. 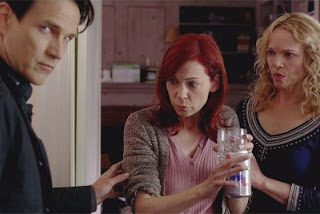 After a few bizarrely tense moments where Bill offers his condolences to Arlene and Andy (but really, it’s Bill. He’s not gonna massacre them, so stop with the scary music.), he tells them he really just needs to chat with Sookie.

He needs Sookie to bring Warlow to him. And in that way that Bill does so well, he makes a convincing case, citing vampire death camps, their friends are in trouble, and if she doesn’t help there will be some non-sexy blood on both their hands. Food for thought.

Alcide & Sam—Ugh, I really don’t care right now. Sam and Nicole fuck in the shower, then he calls Lafayette and finds out that Terry’s dead. So he ships Nicole off with her mom.

Alcide has a chat with his dad about being lone wolves again. Then he goes back to the pack, where he lies about killing Sam and Nicole. Not so fast! Rickie says, as she reveals they found Nicole and her mom. Maybe something interesting will happen next episode.

Vamp Camp—After Eric and Nora escape, Willa informs Pam about the contaminated Tru Blood and then alarm goes off. Pam tells Willa to only tell Tara and Jessica; if everyone stops drinking then they’ll know something’s up. Later, Pam has a chat with her therapist, and exchanges vampire sex for her release into genpop.

Elsewhere, Jason reunites with Jessica in secret. He wants to break her out, but she’s resigned to her fate. Jason is more confused than usual, wondering if Jess has “stockholder’s syndrome.” Then she asks Jason to find vampire James, cause she needs to thank him for not raping her.

Jason does so (he’s been acting real odd this entire episode) and gives Jess and James privacy. The two vamps talk about faith and loss and oh there’s Hep V in the blood so don’t drink it. And then she has James take her vampire virginity. And is Jason right outside the door?

Not that he has time to gawk, since Sara shows up looking classy as fuck, and has Jason thrown into the vamp ladies genpop with a cut on his arm. Are you asking why? Let’s back up. 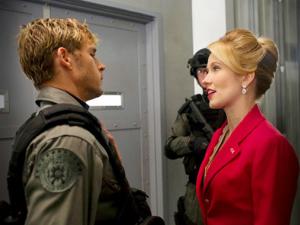 Sara finds Burell’s head and freaks the fuck out. She then gets that one senator guy to help her cover his death up. As far as anyone else knows, he’s in hiding. So she’s effectively in charge of the Vamp Camp now. And seeing as how Jason doesn’t have any leverage...

Into genpop he goes! All the ladies swarm around him, until Tara tells them to back off. Then that one vamp lady we saw a few eps ago stands up to her. Cliffhanger! I really hope Tara kicks some ass, cause I really want to like her again, and having her and Jason explode some vamps would help. 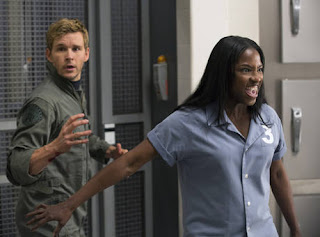 Eric & Bill—After making a speedy escape with an ailing Nora, he takes her to the only place he can think of: Bill’s. He thinks Bill/Lilith’s blood might cure her. But Nora refuses, remembering how boring it made her last season.

Wasn’t there something about Hep V way back in season one? And didn’t Bill and some of the other vamps know about it? So all this thumb-twiddling doesn’t make sense. Just seems odd that no one remembers that. 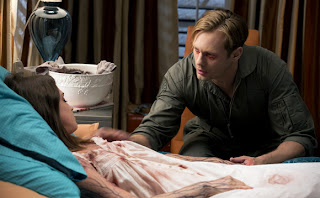 Later, during the day, Eric comes to Bill. He’ll do anything he wants if he’ll help Nora. Cue the sound of a million fanfic writers’ dreams almost coming true. But not at all, really. Bill goes into his premonitions about everyone dying in a white room when they all meet the sun. That’s why he needs Warlow. During all this, Nora exchanges a look with Bill that should clue you in to what might be in store.

Later, Eric prays to Godric to give Nora a second chance, but Nora says she’s already had that. Then we’re treated to the worst flashback we’ve ever seen in True Blood history.

London, 1665. Eric is a foppish Englishman, but you can’t tell with his barely-there accent. It’s like he kept forgetting he should be talking like a Brit. And that hair! What, did you think we wanted more terrible wigs after Salome last season?
I honestly don’t know why he went to find Nora in a London slum, and I don’t care. All that’s pertinent is she’s dying of the plague, and Eric turns her into a vampire. “My death shall be my own,” she says.

Cheesy flashback over, Nora tells Eric he has to save Pam and Willa (oh, and I guess Tara), and to let them stand beside him. And, having lived a full life, the Hep V spreads to her brain. She dies a gooey, bloody death in Eric’s arms. 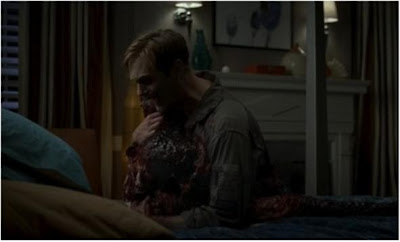 Needless to say, I'm not as broken up about Nora's death as I was Terry's. She wasn't nearly as developed character as him. I guess it sucks for Eric, though.

So in the coming weeks, the recaps might come real slow. I'm in the process of moving, and that's gonna take precedence.