So I am spending my first Thanksgiving relatively alone. I have Smores curling up next to me; the other pigs are hopping about in their cage. But I have no plans. I was going to go to the Cracker Barrel; I may just get something cheaper and faster at McDonald's.

This really doesn't depress me- if anything I just feel lonely. I'm at that odd crossroads in life between my nuclear family (parents and siblings) and having a family (partner and kids). I've been very introspective all month, since November holds a lot of somber anniversaries for me. I feel confident that my life is going okay- and I really don't need to compare myself to others at the moment. However, I do have those times when I think: "Am I going to meet anyone? Am I lovable? Will I be a mother someday?" and I get all panicky I will be alone forever. 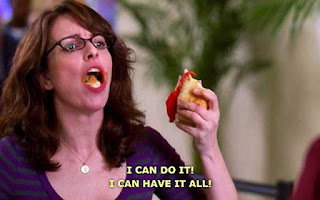 Because I mean- I just started to feel like a decent person again. And I know I am, but a lot of my self-worth is a reflection of how others treat me. Well, anyway. I realized this month I want to settle down some time in the next five years. I never viewed myself as that family-oriented really. I always though I was more career-driven. But I guess it's been a latent impulse in me for a while. Thank god I'm not a straight woman in a romantic comedy, that's all I have to say about that.

So: Thanksgiving entries usually call for gratitudes. 2013 has beaten the shit out of me and I'm still standing. I'm pretty upbeat about things and making some progress, which I've normally been resistant to. I've met a lot of great people this year and became aware that the most unexpected people care a lot about me. I have the guinea pigs, who are sweet and clumsy and sometimes disgusting. I have a roof over my head, generally good health, and I can take care of myself. I have a good job; it's sometimes easy for me to lose sight of the days when I was temping and freelancing, and couldn't make enough money to support myself. And how badly I wanted a real job then and at least I didn't stop looking. That took me all the way to Arizona.

Am I happy to be here? God yes. It's been so lonely at times, but I think it's made me a lot stronger in ways I never realized. I do miss my family though, and I'm grateful I have a loving Mom and two solid siblings.

Coping with my Dad's death has been weird. It's not been as straightforward as I thought it'd be. First, I didn't get to really grieve him in the time after his death. At first I was in shock and when I came home, it was a whirlwind. Then, when I got back to Phoenix, I had my break-up. And unfortunately that took most of my energy and my emotions.

Now that that mess is mostly behind me, though, three months later I'm beginning to attempt to come to terms with it. And it hits me at the strangest moments. I was at Starbucks with my friend Rob last weekend. While waiting in line, I was staring at the pastries. Not because I was hungry but because it was right in front of me. All of a sudden, I had deja vu. I remembered all the times I had gone to Starbucks with my parents, and how my Dad would always get a treat. He'd try to get us to split it with him, but I'd never have any. I'd be like "I'M COUNTING CALORIES DAD, LOOK AT MY HIPS, GOD."

So at the moment I just realized how those days were so far gone and it hit me like (let's employ a cliche) a ton of bricks. And I was lost in my muddled thoughts until the barista took my order.

Hence what I mean by "the strangest moments." I am going home to Erie for Christmas; I expect it to be weird because going home is always weird. But this year will be especially weird.

And heartbreak and losing friends are all hard pills to swallow, but I'm still here.

On the Useless Critic front, it's been an okay year. Seeing as it's pretty hard to maintain this normally when I'm working full-time, I haven't been able to do as much as I'd like. Seeing as some of the other contributors got busier, it's been a 75-percent solo effort. Taylor Birk became an official writer- so congrats, Taylor! :D

I've been flooded by publicists' emails since February. Always "listen to this new band!" and "so-and-so is going on tour!" Which has been AWESOME and a sign of good things to come. However, it's also overwhelming because sometimes I seriously have no idea where to begin. Hopefully though, this is the first step on the long road to some serious music blogging credibility.

(Just so you know, I have plans to review the new Andrew Bird and "Catching Fire" soundtrack before the world ends).

Also: In January, it will mark five years since I began doing this. I'd like to say I've made some significant progress- I have, but I'm no where near where I'd like this blog to be at. I'd like to be able, ideally, to generate enough revenue to make this my full-time gig. Down the line. By the time I'm 30, at least. (I'm 25 now and was 20 when I started this).

And, here you go. ENJOY: