August 06, 2015
So, some backstory on this, because I'm really not a Lucille Ball fan. I know, that's nearly blasphemous. I appreciate her and I think she was a groundbreaking comedienne, but I just never grew up on her like some people did. All that aside, I'd definitely say I can enjoy her work.

I had this dream last week that I did a "100 Women of Comedy" series for the blog. When I woke up, I actually had a list pretty well-formulated, trying to determine where to put Margaret Cho, Amy Schumer, Tina Fey, Mindy Kaling, Gilda Radner, etc.

I thought about this for a while - it's weird, I never get inspiration from my dreams, but now I've been getting a LOT of ideas from my dreams, thx subconscious - and I was like, "Well, I guess I can give it a shot." Then, I saw today was Lucille Ball's birthday, so what the hey, you know. The universe can be pretty persistent with its poking.

I don't have much to say for this post, except that I loved her stomping grapes, and she and I are from the same part of the country. Jamestown, New York is a quaint Rust Belt town. I went there when I was in college and tried to follow in Natalie Merchant's footsteps. FACT: They are BOTH from same place. Isn't this world so crazy?!?!

You probably heard that the very dinky part of Jamestown Ball is from - Celeron, which sounds like it should be a planet in "Star Wars" - erected a terrifying statue in Lucy's honor. Oh, wow. It was pretty scary: 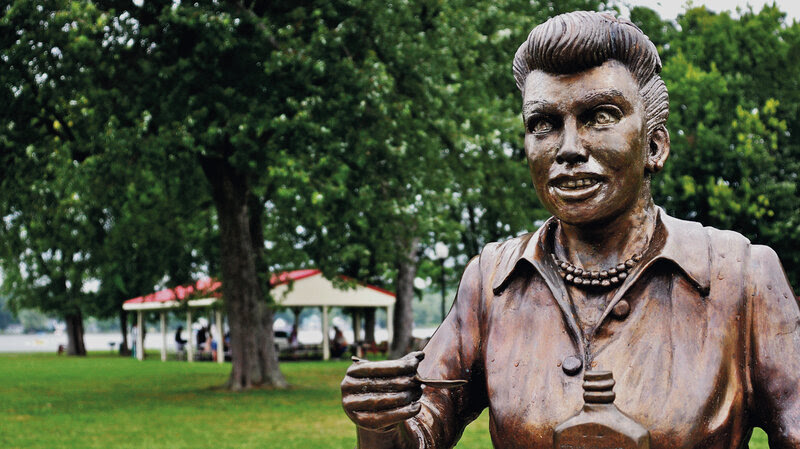 I'm pretty sure the national outcry (national outcry!) over this statue caused the town to remove it. Really, it looks a little bit "Planet of the Apes." Ehhhhhh. You can read more in the NPR story I snagged the picture from.

As for other posts in this series, expect them few and far between; my life is pretty busy. However, I'm hoping to have highlighted 100 ladies by mid-2016. Feel free to leave suggestions in the comments.