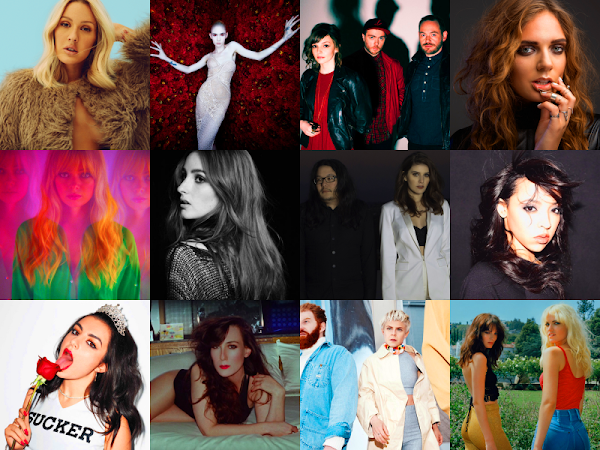 Ellie Goulding, "Love Me Like You Do" / "Something in the Way You Move"

I must admit it took me a few listens to realize how grand and majestic "Love Me Like You Do" is. The song is so tender and ethereal, but it's also brooding and has an underlying darkness to it. Plus I think it was a perfect fit for the scene in Fifty Shades of Grey where Christian takes Anastasia on a helicopter ride overlooking Seattle's night skyline (I actually enjoyed the movie, judge me).

"Something in the Way You Move"—from Goulding's latest LP Delirium—marries a shimmering synthpop backdrop with foreboding, somewhat dark lyrics, which document the singer's dooming attraction to a nameless guy who is bad for her, but she can't help it even if it's bound to end in heartbreak: "When our eyes meet, I can only see the end / But tonight I'm here, yours again." Thematically, it wouldn't sound really out of place in the Fifty Shades of Grey soundtrack.

CHVRCHES, "Keep You on My Side"

Sonically, the Scottish trio's second album, Every Open Eye, doesn't stray too far from the somber yet euphoric synthpop that made its predecessor, The Bones of What You Believe, a success, but that doesn't make it any less of a thrilling set. On the '80s-flavored "Keep You on My Side," lead singer Lauren Mayberry expresses all her anxiety and heartache over a doomed relationship, amid a relentless swell of pulsating, neon-bright synth stabs.

A fun, flirty, and sassy synthpop cut, on which the Swedish songstress proclaims, "If you love me right / We fuck for life / On and on and on." One year later and I still have her superb debut album Queen of the Clouds on heavy rotation. I just love how her songs pair hedonistic, brutally honest lyrics with infectious melodies and hooks. In a way, Tove Lo is kind of what Kesha aspired to be, but couldn't pull off because she lacked Ms. Lo's lyrical wit and natural Scandinavian coolness.

Chromatics, "I Can Never Be Myself When You're Around"

The Portland foursome's upcoming fifth album, Dear Tommy, was originally set to be released this year "in time for Valentine's Day." Well, we're less than a couple months away from Valentine's Day 2016 and no release date has been set yet, but luckily, the band has previewed the album with a batch of singles, the standout being "I Can Never Be Myself When You're Around." The haunting, cinematic number offers a wistful tale of romantic anxiety, bolstered by glassy synths, fuzzy guitars, and thumping kick drums.

The alluring Orange County native never fails to deliver sultry, hypnotic electro-R&B tunes. Goddess was truly one of the best albums of 2014, so I'm positive that her second offering will be equally solid.

Best Coast, "In My Eyes"

I'm a NYC kind of gal all the way, but Los Angeles indie rock duo Best Coast has been on my radar ever since I discovered their latest release, California Nights. True to its title and its gorgeous cover art, the album has a distinctive Golden State vibe to it that is beachy, hazy, and nostalgic. Although the lyrics often read like a high-school diary, a lot of the songs about infatuation, yearning, and heartbreak have resonated with me over the past few months, such as the grungy "In My Eyes," which finds frontwoman Bethany Cosentino regretting a breakup, and "Wasted Time," with plaintive lyrics like "I don't really mind all of this wasted time / Just wish that I had something to show for it."

As much as I love her debut album Aquarius, which bridged the gap between mainstream and alternative R&B, Tinashe's mixtapes are something else. Taken from her latest mixtape Amethyst, "Wanderer" always makes me feel so peaceful and relaxed. It's the perfect soundtrack to those contemplative moments of nighttime solitude.

Even though Class Actress' Elizabeth Harper is based in New York, her major-label debut EP Movies (which features production by the likes of Giorgio Moroder and Neon Indian) has a noirish, glamorous LA feel that is meant to soundtrack torrid late-night encounters. On "The Limit," Harper discusses a lustful, Fifty Shades of Grey-esque rendezvous, her sultry vocals gliding over lush, '80s-tinged synth lines.


Robyn & La Bagatelle Magique, "Got to Work It Out"

Now this is what current electronic dance music should sound like. The collaborations are great and shit, but I need a full-length, Robyn-only album. I mean, it's been five fucking years since the last installment of her iconic Body Talk trilogy!

Say Lou Lou, "Nothing but a Heartbeat"

Ethereal vocals and melancholic lyrics atop dreamy synthpop from the Australian-Swedish sister duo. Need I ask for more? "I've got no air in my lungs / Got no bones in my body / There's nothing left inside of me." That's painful.


Sure, this song may not be wildly groundbreaking or anything, but it's hella catchy, plus it has somehow really helped me through some self-esteem issues I've been dealing with for the past three months or so. Due to lines such as "I'm gonna touch the pain away / I know how to scream my own name" and "I'm gonna put my body first / And love me so hard 'til it hurts," the song has been widely perceived as an ode to masturbation, though Steinfeld herself has claimed that the lyrics are "up to [the listener's] interpretation." Not that there's anything wrong with masturbation—au contraire.

Sadly, I didn't have enough time to listen to all the music I intended to this year, so forgive me if I left something out of my list. As for what 2016 holds, I totally expect new albums from Sky Ferreira, BANKS, Gwen Stefani, Garbage, Sleigh Bells, The Pretty Reckless, and HAIM. It would be awesome if Lady Gaga released something, too.