December 12, 2018
Liela Moss's debut album as a solo artist is atmosphere, dark in places, and ultimately hypnotic. There's a quiet ferocity to "My Name is Safe in Your Mouth;" unlike the more unhinged and raw sounds of her band The Duke Spirit, this feels a bit like a more pensive, thoughtful comedown.

I got the chance to ask Liela a few questions via email about her new album, her inspirations, possible touring, and sleep. The below is our conversation.

What inspired you to go the solo route? What was the watershed moment that helped you make that decision?

I can't say there was a watershed moment; I just didn't want to write atop drums and two guitars for a while. And I didn't want to talk about songs and songwriting. When you are in a band and there is a bit of too-ing and fro-ing naturally in conversation about the emerging songs. And that is funny and tricky and good. But this time around, I felt it would be interesting to internalize ideas and then just work in (almost) silence! A 'banter-free' environment would be a good thing to try.

If you had to describe your album "My Name is Safe in Your Mouth" in one phrase, what would you choose?

Some songs about giant feelings, set in enormous spaces, distilled down into a potent tincture.

I've read reviews of your album that compared your sound to artists like Nick Cave. What would you say were inspirations for you? What influenced you in the making of the album? 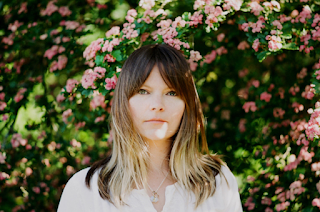 Certainly there were iconic artists in mind, inspiring a kind of 'tone.' I was thinking about Emmylou Harris's album "Wrecking Ball," but also the prowling pace of songs on "Mezzanine"-era Massive Attack. I admire Nick Cave and love the drones that Warren Ellis makes. I did think about that. I was also obsessed with a Ralph Vaughn Williams piece called "Fantasia on a Theme by Thomas Tallis," which begins with such a melancholy mode but progresses toward something euphoric. An unusual classical track that was written by someone 100 years ago who was certainly a turn-of-the-century modern, but with folky ideals.
What would your ideal listening experience be for your audience? How would you imagine them interpreting the album?

Ideally, the audience would cram into my kitchen whilst I sang and made some food for my 1-year-old kid. Because I don't have much time to do anything at the moment, so combining activities is a good idea. And the acoustics of the kitchen are most tantalising!* But better than that, I think a sunset festival show in summer would be perfect. Fresh air, dimming light, and the gloriousness that would inspire.

What is your ideal musical trajectory after this piece? What would you like to explore next as an artist?

I'd like to explore sleep as a subject. For reals.

What are your "desert island" albums?

Here's the arrangement that inspired Liela by Ralph Vaughan Williams. It really is beautiful and worth a listen, even if you don't normally enjoy classical:

Listen to "My Name is Safe in Your Mouth" if you haven't already. It's a humble masterpiece of an album.