An Interview With Maps 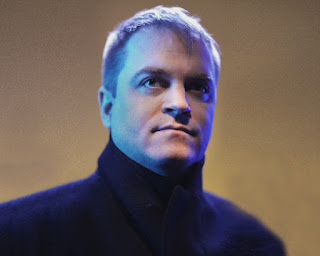 In 2013, I messaged Maps for the first time and requested a Useless Critic interview with him. Maps is just about one of the nicest musicians I've ever spoken with, and through neither of our own faults (perhaps mine, because I'm forgetful AF) the interview never happened. But six years later, here we are - and James Chapman (Maps) and I have finally touched base.

Also, if you've never heard of Maps and you love that wonderful kind of atmospheric stuff M83 and Sigur Ros do so well, I highly recommend giving him a listen. His debut album "We Can Create" is a well-kept secret of mainstream music - a modest modern classic that was nominated for the Mercury Prize upon its release. "Both Sides" - his lead single from this year's "Colours. Reflect. Time. Loss." is the best of Maps - it's a happy, glitchy tune that soars. If a song could propel you through the clouds, it'd sound like this.


Below are the questions I asked to James on his inspiration, his latest album, his career - and his eloquent answers. I sincerely hope you'll give him a listen after reading this - trust me, the several minutes you spend looking for him on your streaming service of choice will be worth it.

What went into making your latest album, "Colours. Reflect. Time. Loss.?" It's been described as an ambitious work, and you can certainly hear that on the record.
I started writing songs for the album back in 2015, so it took a while to get it all together. The ‘ambition’ was that I wanted to push as much as I could in creating a bigger, and more ‘human’ sound. So I was more open to collaborating with other musicians for this album, which was a first for me. I worked with the Brussels ensemble Echo Collective, who performed the string and brass arrangements. I also scored the orchestral arrangements for the album, which was something I had never done before.

I learnt a lot in the whole process, and it was all to do with stepping outside of my usual comfort zone and trying new things, in order to achieve the sound I was searching for.

What was the inspiration behind the album?
I was interested in drawing on past memories and also in the idea of how memory changes over time. I was looking back at childhood memory and tried to use some of the emotion associated with those memories when creating the music. I really wanted to create music with a joyous feel, a sense-of-wonder, that I remembered from when I was a very small child. The time before the cynicism of the world starts to creep in! The lyrics on the album are covering slightly darker themes, so it was always about the balance of the music with the lyrics.

What are your plans for the remainder of the year and into 2020? Will you be touring more? Or focusing on new music? Or just taking a hiatus, maybe?
We played some shows over the summer, which was an amazing experience, and we are playing a show in London at the start of November which I am really looking forward to. I have a brilliant band of musicians around me (most of whom played and sang on the album) and I am really enjoying playing the songs live. I am always focusing on new music, so writing is something that always continues (even when I try to take a break!) but I have no fixed plan just yet. I’m always working on new songs though.

Where do you derive your inspiration from?
It’s a hard question because I don’t think about it too much, the ideas seem to gather subconsciously a lot of the time. But for this album I definitely drew from more classical influences which probably informed some of the style of the album. I listened to a lot of Vaughan Williams and also soundtracks from the '60s and '70s by composers like Bruno Nicolai and Stelvio Cipriani. Oh and a lot of The Beach Boys :-)

When you look back at your career thus far, what are you most proud of?
I think the fact that I can look back over my career is probably what I am most proud of! I feel very lucky to have been able to do this for such a long time, I am grateful for that. I don’t have many other skills besides making music, so I am glad that I have been able to do what I love for so many years :-)

Maps will be performing a show in London on November 4th at Bush Hall in London. Mark Peters will be supporting, and James Holden will be DJing. For more information, please see the poster below. 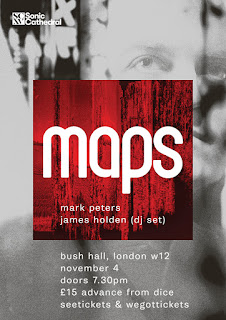