"More Than Love: An Intimate Portrait of My Mother, Natalie Wood"

The first thing I did in this New Year was read the latest book about Natalie Wood, authored by her daughter Natasha Gregson Wagner. I didn't know that much about her daughter going into reading this book; I just knew she had been in some movies in the '90s (the most notable of these being "Lost Highway," "Two Girls and a Guy," and "High Fidelity.") Note: I always confused "Two Girls and a Guy" with the TV show about a pizza place.

Now, for some context, I've voraciously read everything about Natalie Wood I could get my hands on since I was a kid. She's always fascinated me. I guess she was my childhood idol, which is kind of odd when you consider how I am not the most gender-conforming of women, but there was something about her I just found so compelling. Hard to put into words, really. But if you watch "West Side Story," "Splendor in the Grass," "Rebel Without a Cause," or even my childhood fave "Marjorie Morningstar" - I think you'll get it.

Now there are no shortage of books, documentaries, or TV specials devoted to Wood - specifically the night of her death. And at this point, nearly 40 years after that fateful night, I think the public needs to collectively accept we'll never know the full details. This book by Wagner takes the stance that Robert Wagner is innocent, and that's certainly a possibility that shouldn't be discounted at all. So much speculation says otherwise, but this isn't really something we'll probably ever know the full truth of - but if Wagner says her Dad is innocent, I would probably give her some credence with that.
I didn't really expect the book to be so much about Gregson Wagner, something I was a little caught off by at first, but quickly found it her sharing her unique take on her legendary mother's work and life, and how it would influence her. Plus, she also shows how grief can really affect a family, from bringing out the worst in people to leading to self-medicating to numb the pain. Trust me, I lost a parent on the younger side, too. I can relate.
I finished "More Than Love" in one night. I was recently kicked off Facebook (LOL, don't even ask me what I did, I've no clue) so my focus has been a bit better than it would be otherwise. Plus, I had the time, might as well read. The book proved to be hard for me to put down just in general - I can't speak for everyone though, as I'm sure not everyone out there has been interested in the life and films of Natalie Wood since they were like, 9. 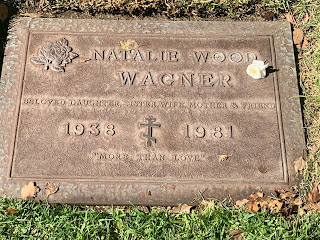 Yes, two years ago before I went to Finland, I asked a friend to drop me off at the Westwood Village Cemetery in Los Angeles and got to finally see Natalie's grave. I don't normally go out of my way to pay respects to celebrities, but this was something I had wanted to do for a long, long time. I ended up bonding with a couple who were searching for Bettie Page's grave, because neither of us could find our respective celebrity's graves. Until we were across the lawn from each other and I heard screaming "I FOUND HER GRAVE BRITT." Then I sat there for a while in front of the grave, and the flower and penny you see in this pic are from me.
When I came to the end of "More Than Love" - I found myself very sad for the daughters, but also happy that by the end of the book their lives seem to have found their way. And I felt somewhat better about Robert "RJ" Wagner, because the way he's portrayed in the book is very endearing. As someone who has read nearly every Natalie Wood book known to man, this one is certainly special. And for someone who is like, "how could it not be, though? Her own kid wrote it" - I don't know man, but trust me, I've read some TERRIBLE celebrity biographies and this is not one of them.

In other news, I did watch the documentary that accompanied this book last year, which was sweet - and a necessary companion piece to this project.