April 25, 2021
This is almost an immediate hit for me; "In Love" is warm and fun, powerpop melded by a tiny bit of dreampop, something that seems to represent the logical progression of indie since the early 2010s. 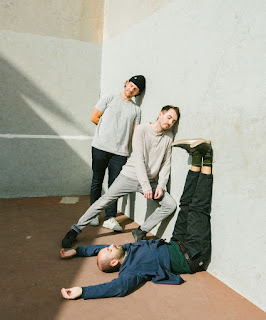 They certainly look like they're coma-tose culture (get it? Photo credit - Kelly Victoria)
Coma Culture features Young the Giant's Eric Cannata and Francois Comtois as well as producer/songwriter Jon O'Brien. The trio found musical kinship via their love of
"Broken Social Scene, Sparklehorse, Slowdive, and the Cure." That inspiration directly shapes their sound, which is actually pretty unique by today's standards. And their debut single "Coma Culture"directly influenced - well, you know, their name.
Their first LP "Camouflage" is set for release this June 25th via Repost Network and I'm certainly looking forward to what that entire album sounds like. The promise of their lead singles is certainly favorable and hard to overlook - irresistibly charming.