September 22, 2009
So recently I stated I was excited on Dan Brown's latest novel, but that level of joy does not compare to what's on shelves now.....
"American on Purpose: The Improbable Adventure of an Unlikely Patriot." by Craig Ferguson. That's right, Craig Flippin' Ferguson aka the Late Late Host, everybody's 2nd favorite Scottish-American.

Craig F is hailed by many as the best late night host on TV these days, and yes some people say he's even better than Leno, Conan, Letterman, and even Carson Daly (The last one was a joke.)

But all chestnuts aside, Craig is hilarious, and I will definitely read his new book on an afternoon at Books A Million, probably next weekend. Tough times, word up.

QATFYG: Are you a Craig Ferguson fan? Who is your favorite Scottish-American? And who is the best late night talk show host? 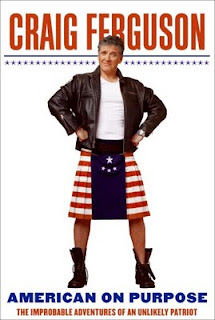