April 21, 2011
Courtney Cox:  I have nothing better to do with my career. might as well make another one of these!


David Arquette: Is that okay baby? I'm going to be doing blow off the production tech de whole time. We have an open marriage, right?


Sarah Michelle Gellar:  I totally died in one of these films and haven't been in much since. BRB I'M GONNA GET HACKED TO DEATH IN THE SHOWER NOW


GHOSTFACE:  Yes the shit is raw, comin at your door
Start to scream out loud, Wu-Tang's back for more.`

funeral scene
NEVE CAMPBELL:  I was supposed to be giving an eulogy but all I feel like saying is I'm dating the guy from the Old Spice commercials. That's it. RIP Sarah, you were so good in Buffy.
Courtney:  This all feels very 1997.
David:  Right? Hold on baby, I'm going to go sleep with the florist.
Florist (think Michelle Rodriguez a la SLUT):  HAY BB.
Courtney:  (drawn-out middle aged white woman sigh)
Funeral Director (they do exist, don't they?):  Everyone, please go to the mall for the funeral party. Justin Bieber will be performing.
THE CAST OF COUGAR TOWN:  WHY?
Funeral Director:  And please wear as little clothing as possible!
THE CAST OF COUGAR TOWN:  OKAY. COMMUNITY IS SUCH A GREAT SHOW.
NEVE CAMPBELL:  I'm also signing my new book at the local Border's! Doesn't anyone care?
BITCH, BORDERS CLOSED.
NEVE CAMPBELL:  *sits behind a gravestone and cries*
Behind said gravestone, we see an Edinboro English student.
STUDENT:  I come to this cemetary to get inspiration for my ~art~. Look at all the Linkin Park and Smashmouth I have on my ipod!
NEVE:  Eww. (leaves in a Sedan)

GHOSTFACE:  AWHHHHHWWWWWWWW
STUDENT:  WUT! NO! I HAVEN'T FINISHED WRITING MY CESTINA!
*is hacked*
at the Ashtabula Mall
JUSTIN BIEBER:  I'm here to make all the ladies feel real good and stuff.
DAVID ARQUETTE:  Honey, I'm going to Hooter's and having a hooker sit on my face. Dat cool with you?
COURTNEY COX:  Whatever; I'm sleeping with the whole cast of COUGAR TOWN.
DAVID ARQUETTE:  I love you so much!
(while leaving, he runs into GHOSTY-FACE)
GHOSTFACE:  I ain't killing you! You have a mustache! Go give a lucky stripper a ride with that!
DAVID ARQUETTE:  Sweet!
note:  I know they are waitresses, not strippers.
JUSTIN BIEBER:  Baby, baby, baby....
GHOSTFACE:  WAHHHHHHHHHHH SICK OF HEARING THIS SONG ON THE RADIO
JUSTIN BIEBER is hacked.
NEVE CAMPBELL is alone at a mall kisok.
NEVE:  DOESN'T ANYONE CARE ABOUT MY GODDAMN SELF-HELP BOOK?
How to Exist in Hollywood With a Minimal Career and Date the Guy From the Old Spice Commercials.
ghost of DREW BARRYMORE:  Hey I like died in the first Scream. Avenge my death, Neve! Avenge, like, IT!
NEVE:  NO. GO BACK TO COVERGIRL.


-
COURTNEY COX:  Ghostface, I need to go back to filming Cougar Town.
GHOSTFACE: NO ONE WATCHES YOUR SHOW BITCH WAHHHHHHHHHHHHHHHH.
COURTNEY COX:  *after slapping Ghostface* NOT TRUE JENNIFER ANISTON SO DOES.
slap slap slap
slap
COURTNEY COX:  WHO ARE YOU ANYWAY? I THOUGHT WE CAUGHT YOU IN THE LAST INSTALLMENT.
GHOSTFACE:  UM.
When Courtney rips off the mask of the Ghostface....
REBECCA BLACK?
COURTNEY:  What? I thought you LOVED Justin.
REBECCA *sobs*:  The internet hates me, and I am NOT dating the Old Spice guy.
COURTNEY:  .......
(NOTE, I HAVE NOT SEEN ANY SCREAM MOVIES. HAHAHA) 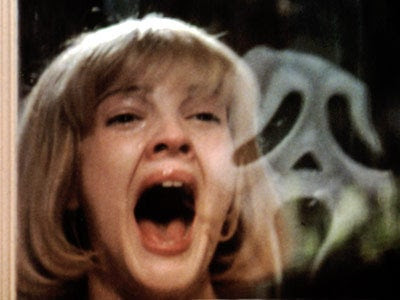