Dudes and Being Direct

I have gotten into this habit as of late, when it comes to guys and dating, of being very direct.


Me: Hang out as platonic friends? Or like romantically hang out? Because no to either. 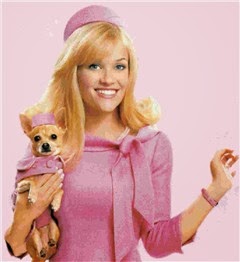 I find this to be the very best strategy for avoiding awkward situations, and guys, I am not interested in. When I was younger I had this tendency to hang out with a dude even if I found no romantic interest him. A lot of times I found some aspect of them interesting and wanted a friendship. If he would ask me out I would dance around the issue, making excuses, or suggesting that we bring others to make it a group function of sorts. All of that was fine and good for a while but it was only prolonging the inevitable. And then there was always that awkward conversation…

Guy: So I just really want you to know, I like you a lot.

It was always awkward and terrible and I would be accused of “leading [a guy] on.” I didn’t see it then, but I get it now. They felt as though they invested time and effort into a potential romance and therefore felt cheated when feelings weren’t mutual. Sometimes after the inevitable conversation these dudes would drop off the face of the earth never to be seen or heard from again, at least from my friends and my perspective. Other times they would hang around for a while and attempt a friendship, but without the promise of something more these “friendships” would often fizzle and die.

I don’t do that shit anymore. 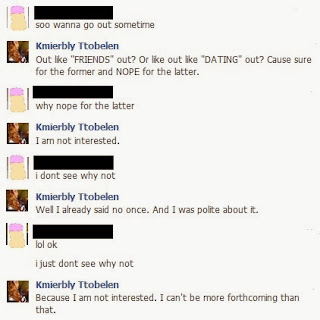 I have to mention this was after a poignant conversation in which I mentioned that I was not looking for a relationship.  AND another one a week later in which the individual asked me out and I said, literally, “I am not interested.”

More often than not this response is met with  AGAIN, an awkward moment but it is short lived. No one gets their feelings hurt. Things are made very clear. And not one wastes their time.

Every once in a while though I get some sort of backlash. Someone calling me a name or asking some sort of explanation.

In a bar it’s easy enough, lots of random people, a crowd to get lost in AND alcohol to keep spirits high in the wake of a rejection. One gentleman, upon hearing my response, nodded his head backed away and we both went on our merry ways.

peace out bro, have a great life. But it’s not always so simple. I find a lot of the backlash comes in private conversation and mostly behind the comfort of a keyboard.

I’ve been called a bitch before and this just baffles me. A simple straight forward answer on my part merits a derogatory utterance from you? Really? Do you realize the only way in this scenario I would not be a bitch would be to accept your advances? Faced with that choice I’ll be a BITCH all day.

Maybe a lot of this comes off as callous and that’s not my intention.  My “Nope” comment listed above, as I said, came after multiple no-bull-shit answers from me. The person was sore about it but finally backed off. I look at it like this. If you don’t know me well enough to realize that the flippant “nope” response was just how I am, just how I act, and just how I talk IRL, than you don’t know my personality well enough to ask me out in the first place.