Before She Was Bella! Sha! 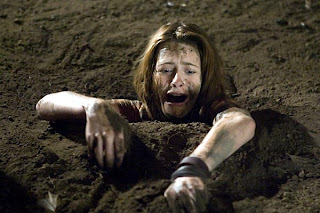 So last night I saw the movie, "The Messengers" on cable, and before and after every commercial they had to remind us viewers that the film starred Twilight's Kristin Stewart. As if we could forget, considering she was the female lead.

I'm just bringing this up because I hear so many people complaining that Kristin Stewart is not the right person to play Isabella Swan in the Twilight Saga films. So here, her role in "The Messengers," was definitely a better role for her. She plays a dysfunctional teen with an attitude problem, and gives off a lot of negative body language (in bed). Just kidding, she doesn't have a sex scene. Unless they edited it out on cable. Who knows (in bed)?
Now I'm killing it. I'm just trying to say that I thought this role was a better fit for KS. Believe it or not.

But speaking of KS, did you know she and co-star Robert Patterinersteinerson both got $12 Million for "New Moon." KS is younger than I am, and I'm lucky if I have $12 in my bank account. Anyone else up for gold digging?

But as for the film, "The Messengers." Well, let's just say casting the right lead actress couldn't save this crap-fest. The film also stars Dylan McDermott (The Practice) and John Corbett (My Big Fat Greek Wedding), both of which are great actors, but this film didn't give them a chance to show any acting potential. It was boring, dull, cheezey, not scary at all for a horror film. And I don't blame the actors here. I'm not sure really, who could save this one.

So my result for "The Messengers," Kristin Stewart is good for her role, but the movie is shite.

QATFYG: So what are other Kristin Stewart roles you like? Have you heard that she is playing Joan Jett in an upcoming film called, "The Runaways?" And are you vampire freaks psyched for New Moon? 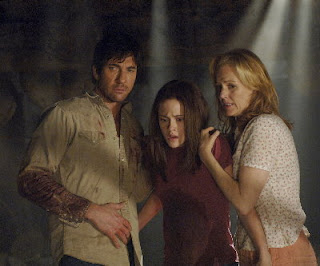