JOHN DILLINGER DIED FOR YOUR SINS

so the other night, after all the toy ukuleles we found were damaged or just plain crap, Jason and I saw "Public Enemies." which was OH MY GOD WHAT I'VE BEEN WAITING FOR. moviegasm!

I've never had much appreciation for Michael Mann prior to this film. just another name I heard spat at when speaking of directors. but he did a fine, fine job with this. at times, it feels a bit long and like some things could well be cut out (I loved how Channing Tatum was billed as such a big role and he's in it for like, five minutes, if that) and of COURSE they romanticized Dillinger! how else would a movie like that work? (especially with Depp playing him)

The Depression itself is glossed over; there are very few (if any) mentions to the historical timeframe. but who gives a shit! I went to a see a movie that was containing of:
a.) fast-paced action scenes (SOMEBODY NEEDS TO BRING MACHINE GUNS BAAAAACK)- there was something interesting about the way it was shot, like very realistic. some trick they used made you feel like YOU WAS THERE).
b.) 1930s glam (which there was a lot of, I'm sure this will earn a few Best Set Design or Costumes or what-have-you nominations this Oscars)
c.) Marion Cotillard and Johnny Depp getting it on (which happened and was beautiful and possibly in the butt). 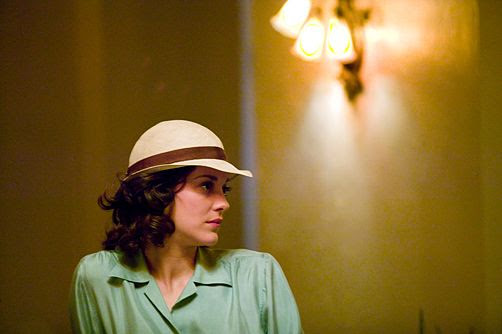 The gangsters (minus Johnny) were a fairly ugly lot- keeping in the lot with Babyface Nelson and such who were not at all pretty men. but I was most impressed, I think, with the finale and how well Depp played Dillinger! seriously, I had trouble seeing it beforehand, but he slipped so perfectly into the role, like he always does. towards the end he even looked a lot like Dillinger, which I didn't think was possible.

LEELEE SOBIESKI SIGHTING (CUE OMINOUS MUSIC) Jason shouted her name and I was like WUT until I realized, shock of all shocks, it WAS that bitch!

overall I generally was pleased with the film, considering how I was anticipating it. I'd see it again. if it was a person, I'd sleep with it! B+