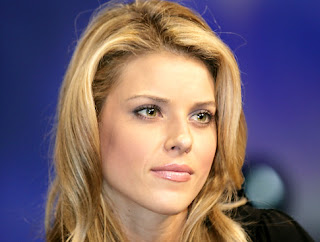 This is a segment that is meant to feature actors and their work. And now that Carrie Prejean is an actress, her face shines on the s/s stage. This is a person that can't stay out of the headlines, even after her 15 minutes were up for her little charade a few months ago, she bounces back into our lives with her acting.

Carrie does some of the best acting in the world........sex tape acting. This has helped to make the careers of Kim Kardashian, Pamela Anderson, and of course Parissss Hilton!

But in other times, Carrie P has been known for running her mouth, especially on the issue of gay marriage. This bitch has attitude problems, and really needs to shut the deuce up! If she wants any hope of a future, she'll need to find it in the sex tape business.

In other news related to bitches, I voted Eva Longoria Parker for a people's choice award for Best Comic Actress on TV or something like that. Yeah, that'll be the day when she wins.

QATFYG: Do you like Carrie Prejean? What is her future? Does she deserve a Peoples' C Award for best web personality (she is not nominated btw, maybe next year)? And what are ELP's chances of winning the PCAward?