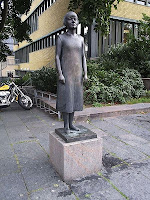 I know! I haven't posted poetry in forever! Sigh. having a class in it will do that to you, you know. Anyway, this is Karin Boye, a poet from Sweden who has been dead for a very long time. Jason introduced me to her in high school a la Nanook of the North, who have a song about her grave. (sweet little band, check them out) She was a lesbian poet that committed suicide by swallowing a bunch of pills and sitting on a boulder in 1941. She did a lot more that poetry- for example, she's the reason most of T.S. Eliot's work is available in Swedish- but that's what people remember her most for.

Including this piece, which is called "Ja visst gör det ont," which is translated to "Yes, of course it hurts":

Of course it is hard when drops fall.
Trembling with fear they hang heavy,
clammer on the branch, swell and slide -
the weight pulls them down, how they cling.
Hard to be uncertain, afraid and divided,
hard to feel the deep pulling and calling,
yet sit there and just quiver -
hard to want to stay
and to want to fall.

It's probably 1000x better in Swedish. keep that in mind.

that picture of her above is a statue in her honor in the town of Goteborg. I would like to think if I visited it would come alive and give me advice. we can dream.

English translations of her work are available here:
http://www.karinboye.se/verk/dikter/dikter-en.shtml