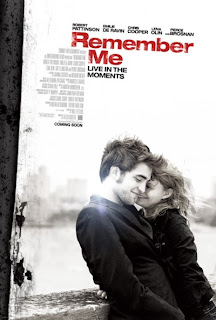 So I think during “New Moon,” they played the trailer from “Remember Me.” The whole theatre went crazy for Robert Pattinson, but I forgot about it until I saw another preview today on you tube.

So this a movie about a guy (R Patz) who has no direction in life, and he gets beaten up by Chris Cooper, a police officer. However, that’s not the most important part. He moves on to seduce Chris Cooper’s daughter, the darling Emilie de Ravin. This is not my genre at all when it comes to movies. For the most part, I tend to stay away from romance. And these days, angsty romance has been something I've detested, but I do not say that for this film. It looks rather interesting. Although, some lines by Pattinson seemed a little too grandiose to be digestible, I won't be focusing on him for most of the movie. Go EMILIE!

The first thing I noticed about this movie was that it has 3 major actors, Pierce Brosnan, Emilie de Ravin, and Robert Pattinson all of which are not American, but playing Americans.

Emilie de Ravin of Australia on the other hand is amazing. She sounds like such a natural American. After I saw season 1 of “LOST,” I had to wikipedia her to see if she was really Australian, and indeed she is. But I would never have known from watching the previews for “Remember Me,” I would never have known she was Aussie if I didn’t already know. She does American better than she does Australian.

Pierce Brosnan is also shedding his Irish tones for the stern and fatherly American Dad gimmick. He plays a pappy in this film, and it’s fine, but again nothing mind-blowing.

I just found it odd, that three of the four main characters are playing Americans are

BTW Emilie de Ravin is a name that is never mentioned enough. She'll be a knockout, like Striesand and that Arnstein feller.

QATFYG: What foreigner would you most like to see doing an American accent?
(Don’t say Prince Albert.)