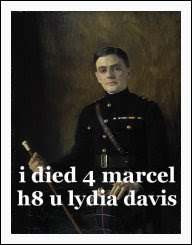 Did I mention last time I’m reading the hardcover edition of the newer Lydia Davis translation? Scott Moncrieff was probably admirable for literally dying from serving as the original to-English translator, but I’m just not into him that much.

So. We’re in Combray at his Great Aunt Leonie’s house, which is where the family is living. It’s not entirely clear if she’s a self-imposed invalid or a shut-in by choice, but she’s been withdrawing further and further since the death of her husband and now no longer so-little-as comes out of her room, instead always keeping to her “uncertain state of grief, physical disability, illness, obsession, and piety” while Francoise, the housekeeper, is becoming so, so sick of putting up with her continuous fuss.

Thankfully for Leonie, she still has Eulalie, a retired maid who stops in and doesn’t do much other than enable Leonie’s self pity: she requires her visitors “commend her on her regimen, commiserate with her for her sufferings, and encourage her as to her future” simultaneously, and Eulalie— she’s adequate enough.

Amid this, Proust introduces Legrandin, an engineer with artistic and literary inclinations; Proust suspects he’s of the sort whom imagines the life he’s leading doesn’t necessarily suit him, so an “indifference mingled with whimsy” or an “application that is sustained and haughty, scornful, bitter, and conscientious” is brought along to their “actual occupation,” and it’s not really that important right now. You can compare his demeanor with Leonie’s if you’re into that and wonder if Proust is insinuating anything, but even he’s too busy right now because he has pink-dressed ladies to have a convulsion over when deciding if he should kiss them or not.

Proust loves the theatre— platonically— because his parents have not yet allowed him to attend a performance, although they’re ok if he goes to look at / painstakingly examine the posters; seeing an actor exiting one afternoon filled him with the “ecstasy and suffering of love,” leaving him to wonder if seeing a woman he thought to be an actress would render a state of “prolonged disturbance” while he tried “impotently and painfully” to imagine what her life may be like, ending the sentence with an exclamation mark.

Happening to meet such a lady at his uncle’s— “a young woman from a good family, though she was no longer from any family”— leaves him so wanting to kiss her hand despite imagining this as “bold as an abduction”; blood rushes to his head and whatever and he takes her hand, places his lips upon it, thrills the lady, and is ushered out by his uncle. The next page, 81, gives way to one of the passages which has had me yell OH SHUT UP! at the book several times through by now, something I don’t typically do with other books. I’ve thrown Burroughs’ Soft Machine against the wall and threatened fire to Jane Austen, though attempting to engage the author into an actual conversation because he’s become so fucking irritating is unique to these volumes. Before segueing into the abstraction of the apparently mythological kitchen maid, for the singularity of her exists in the succession of others—

I imagined, like everyone else, that the brain was an inert and docile receptacle, without the power to react specifically to what one introduced into it. . .

— I’m unsure if it’s the “everyone else” or that fact that this is coming from a child or if reading Proust at times feels like being stabbed by thousands of tiny knives, though his friend Bloch is shortly introduced amid the distinction of he being the only of Proust’s friends whom eventually stops being invited because no one at the house can stand him. Although this disturbs the young Marcel because this disabled his ability for an explanation regarding Bloch mentioning “fine lines of poetry” becoming “all the finer” should “they [mean] nothing at all,” his subsequent comments to Proust’s father, who asks if it is raining— “Monsieur, I absolutely cannot tell you if it has been raining. I live so resolutely beyond the physical contingencies that my senses do not bother to notify me of them.”— once again had me warm to the book, finding sympathy with his father because oh my god.

Other things to happen between pages 50 and 100 include asparagus, military parades, Francoise feeling human, phantom women, cathedrals, and reading Bergotte. I'm not getting into Bergotte just yet because I'm going to try to enjoy today.