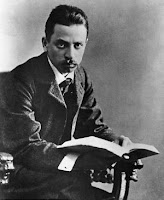 Rilke kept silence as a poet for twelve years before writing Duino Elegies and Sonnets to Orpheus, which are concerned with 'the identity of terror and bliss' and 'the oneness of life and death'. Duino Elegies was born in two bursts of inspiration separated by ten years. In 1910-1912 Rilke was for some time the guest of Princess Marie von Thurn und Taxis-Hohenlohe at Duino, her castle near Trieste. According to a story, Rilke heard in the wind the first lines of his elegies when he was walking on the rocks above the sea - "Who, if I cried out, would hear me among the angels' / hierarchies?"

In 1913 Rilke returned to Paris but he was forced to return to Germany because of the First World War. Duino Castle was bombarded to ruins and Rilke's personal property was confiscated in France. He served in the Austrian army and found another patron, Werner Reinhart, who owned the Castle Muzot at Valais. After 1919 he lived in Switzerland, where he died on December 29, in 1926. He had suffered from leukemia, and died of an infection he contracted when he pricked himself on a rose thorn.

Important part of Rilke's writings are his letters (to Marina Tsvetaeva, Auguste Rodin, André Gide, H.v.Hofmannstahl, B.Pasternak, Stefan Zweig etc.), which have been published posthumously in different collections. Rilke's sense of alienation was summed up in his words that it is our 'fate to be opposite and nothing else, and always opposite'. In his early works he imported mystical elements in his poetry, but later Rilke dealt more with the role of an artist, who must "speak and bear witness." "Praise this world to the angel, not the unsayable one; you can't impress him with glorious emotion; in the universe where he feels more powerful, you are a novice. Show him something simple which, formed over generations, / lives as our own, near our hand and within our gaze." (from 'The Ninth Elegy')

How my body blooms from every vein
more fragrantly, since you appeard to me;
look, I walk slimmer now and straighter,
and all you do is wait-:who are you then?

Look: I feel how I'm moving away,
how I'm shedding my old life, leaf by leaf.
Only your smile spreads like sheer stars
over you and, soon now, over me.

Whatever shines through my childhood years
still nameless and gleaming like water,
I will name after you at the altar,
which is blazing brightly from your hair
and braided gently with your breasts.