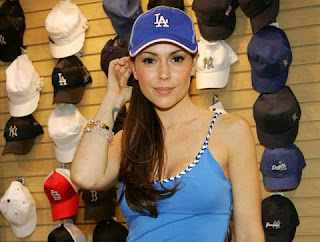 Tis a big one.

So this week goes to none other than Alyssa Milano.
I will start this post in a way that I don’t think I have ever started another post by saying: I wish I had a photo of her eating very large strawberries. That was not meant to sound as weird as it does.

Alyssa Milano has been an actress that has crossed over many squares in the chessboard that is the Sunset Strip. She has a look that is captivating, and she also a screen presence that makes many other emotions rise to the occasion.

For example, she probably had one of the best cameos ever on the show Family Guy.

She has been on the scene since 1984, and we are not talking just "Who is the Boss?" Alyssa has divulged some prime classics like "Poison Ivy II." = That is a fun movie to watch if you are hyped on caffeine.

And yes of course, on “Charmed” she was the ho. I only say that because they did the seven deadly sins episode, and of course Alyssa Milano ended up with the sin of Lust!
I hate to get too specific, but I think I still remember a fragment of one of her lines.
“……and then I was unzipping his pants…with my teeth.”
(Gold)

QATFYG:
What is your favorite Alyssa Milano quote?

What celeb would you want to get Charmed by?

And who would you want to see eating fruit?

I will answer first.
1. See above.

2. Obv, Michael C. Hall (in a platonic way) and Serbian tennis star Ana Ivanovic as long as she brings A Game….again, that was not meant to sound weird. 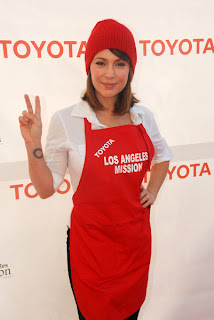 PS She even made the apron sexy.