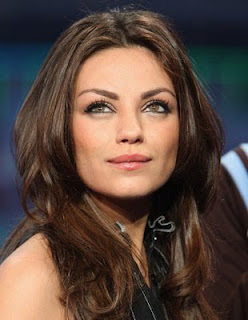 So hello world and Happy Mila Kunis Week,
So this time, I am going to do the Spotlight/Shoutout a little differently. Normally, I write this column to describe the accomplishments of actors.
But today will feature a valuable anecdote.

Keep in mind, I was ten years old at the time of this, and I was rather unfamiliar with many concepts of human life.

The first time I remember Mila Kunis is of course on “That 70’s Show,” playing the character of Jackie Burkhart. She was the GF of co-star Ashton Kutcher’s character (Michael Kelso) at the time, and I remember a scene from an early episode of season one where they were in Kelso’s van…..or shaggin’ wagon.

I just remember I got so giggly and even giddy for almost no real reason at all.
I was even more excited than when I saw the sex scene in “Starship Troopers.”

What was valuable about this anecdote?
I guess I was just trying to say that Mila Kunis is more entertaining than “Starship Troopers.”

QATFYG:
What is one of your favorite moments from network television?