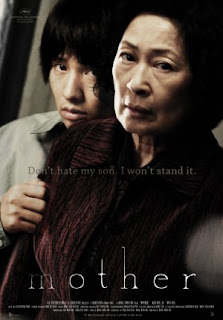 So by the thanks of the graces of a friend, I happened to encounter this film “Mother” from Korea. It is the tale of a rather overbearing mother that is forced into a quest of trying to prove her son’s innocence for a chilling murder.

It begins to show a woman with a son, whom she adores, caught up in some negative lifestyles, but really, he is no more than a petty thug and not a hardened criminal.

This is a film that establishes with lots of bizarre scenes, and by bizarre, I mean they are only weird for a little while.
As for the ending of the film, all I can say is it reminds me of that Japanese classic film “Rashomon.”

From the title and any cover images this may seem like a film that follows the depth of a mother’s love.
But as that lovely Stephin Merrit once wrote.

“Things are not what they appear,
Beginning with a mother’s love,
When a helping hand comes near,
It leaves an empty glove.”

As the mother in this film launches her quest to find the real killer and prove her son’s innocence, she falls into a world that reveals the previously mentioned bizarre nature of life. The humanity around her is engulfed in the strangeness.
I am not a person that gives away endings, but this ending was one that did not offer full closure for me. It was just a touch unsettling. This is a mystery that does not end in satisfaction. It ends in discomfort.

BUT this is also a film where people scream SPAGHETTI during sex, so that can take your fu*king cake.

QATFYG:
When you are at the Korean restaurant, does the waitstaff seem as strange as they do in films?