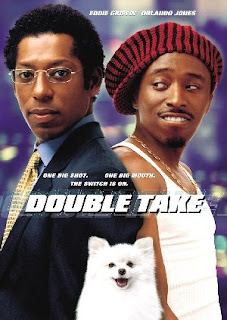 Sizzle Boom Bang, it's Wednesday (it's not yet Wednesday), and that means the throne is open for coronation. Sort of.
This Spotlight/Shoutout goes to Orlando Jones.

Why? Because he used to rule the world, and now he sweeps the streets he used to own.

Orlando Jones was once a name that was all over the globe {Goin' Global).

Yes, he tried to sell clear fizzy bubbly sodas with a slogan that was somehow related to peoples' butts. I don't know how that gets you famous, but this guy made it that'a way.

I do remember the Orlando Jones Show, which for a time was in the moodswing of "Happy Hour" with what's his name? and even reminiscent of "The Arsenio Hall Show."

And let's not forget "Double Take."

In many ways this made Seventh-Grade Girls find him hilarious.

QATFYG:
What are you going to do next?