Ellie Innocenti, from Deluka, which is a PRETTY WOMAN reference I think.

July 15, 2011
Recently I caught wind of DELUKA by way of Oh Land at the Brooklyn Bowl. Their sound is very electronic but with a fist- I was strongly reminded of Garbage, the Duke Spirit, etc. It's definitely worth checking out (I highly recommend them). I got the chance to ask lead singer Ellie Innocenti a few questions in regards to their new EP "OMFG," touring and living in New York. 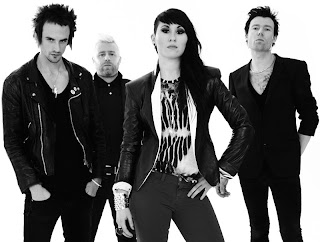 Can you talk a little about your new EP coming out? What was it like, putting that together?
Ellie: The new EP is a collection of reworked and remixed versions of our current single OMFG. We basically chose our favourite and most varied remixes that other artists had done for us, and threw in a little acoustic version done by ourselves for fun in a friend's bedroom studio in Birmingham.


What made you relocate to New York? What are the chief differences between that and the British music scene?

Ellie: We relocated primarily because the label we are signed to; VEL Records, is based in Brooklyn. We were in need of a change and a challenge, and who wouldn’t jump at the chance to do things backwards and make their first proper album with the NYC skyline as their backdrop? We still have to pinch ourselves that we ended up over here and that this has become our home.* The music scene does differ, but ultimately in Brooklyn there are a bunch of bands ranging in diversity all fighting for attention and to make this their full time job, as there are in Birmingham.


What's been your biggest accomplishment as a band so far? What do you hope to achieve?

Ellie: I think just having the opportunity to travel and play in different countries with our music. When we were living in Birmingham we were always looking further a field and managed to find ourselves playing random festivals in Paris, Berlin and even Bucharest. Most recently we were asked to play at Lollapalooza which is a massive realization of a fantasy for us. We like big audiences, our music is not exclusive and we’re not precious about it, we want people to hear it and enjoy it, on one level or another.


Are you planning any big tours for the future? It seems you're doing some stuff out in Cali and you recently played a show with Rye Rye and Oh Land, here in New York.

Ellie: No big tours as yet, we just recently came off a nine week tour of high schools all around the US and we really felt inspired to get back in the studio and to write. So we’re doing that at the moment, and playing a few one off shows here and there, like Lollapalooza and the Sunset Strip festival in LA just to keep the live energy up.


What were your musical influences, coming together as a band? In fact, what's Deluka's backstory?


Ellie: We all met when we were pretty young teenagers at a bar in Birmingham called ‘The Jug of Ale’. We hung out there, cut our teeth in various other bands, DJ’d, got up to some mischief, and came together for our mutual love of older rock and roll and newer electronic music.


many thanks to Ellie for taking the time to do this!