July 01, 2011
This has quickly become my favorite part of Fridays. When I can engage in the bottomless supply of No Doubt trivia I have accumulated throughout the 23 years of my life.


Today, I decided to go back to the album of No Doubt's I've been most neglecting (and arguably their most important) Tragic Kingdom. Yes, this 1995 classic is what brought the group to mainstream attention. It's their last somewhat ska-influenced album and also the last that the founder of the band (and big bro of Gwen) Eric Stefani played on. He abandoned No Doubt to chase dreams of being an animator, and dude was relatively successful, getting a stint on the Simpsons.

by the way, he even drew No Doubt into a Simpsons episode:

anyway.
The big deal/deciding factor behind Tragic Kingdom- an album with art far too concerned with the orange supply of SoCal- was Gwen's break-up with bassist Tony Kanal. The two had dated from the late 80s til like 93/94. The whole album is basically a "fuck you" to Tony. The two are great friends now, obviously. They're still in the same band together. "Cool" off Gwen's first solo album is about their present relationship. GWEN, YOU'RE SUCH AN OPEN BOOK.
No Doubt SORT OF rolled in on the wave of "Riot Grrl." But not really. No Kathleen Hanna bookishness here! 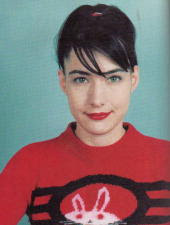 sry (p.s. Kathleen Hanna I hate Jason Mraz too! high-five)
The biggest song off this album- which was HUGE when it came out, HUGE HUGE HUGE- was easily "Don't Speak." Many high school girls probably thought this was their anthem when their boyfriend (probably Red Hot Chili Peppers-listening and Air Jordans-wearing, it was the 1990s!) left them for a TLC wannabe. Again:  the 1990s.
However, most people don't realize it was a happy song originally! That's right- the song itself began being created when Gwen and Tony were still an item. So the DON'T SPEAK came from MEANING that SHE WAS SO HAPPY SHE DIDN'T WANT TO SPEAK. THERE WAS NO REASON FOR WORDS.
one broken heart later, and you have:
Our memories
Well, they can be inviting.
But some are altogether
mighty frightening.
As we die, both you and I
with my head in my hands
I sit and cry...

Here they are on Storytellers circa 2000 saying it better than I ever could.

So the DON'T SPEAK obviously- the lyrics are easily understood, it's by no mean hiding behind Leonard Cohen metaphors or Sondre Lerche wtf-ness- means she doesn't want to hear your shit you just broke her heart you son of a bitch. I think we all know this feeling far too, too well. but nonetheless, it's a gorgeous, gorgeous song. and things worked out for all band members, in the end!

also, I love this video. Gwen in this video? so hot. SIGH