Zooey Deschanel is suspiciously omnipresent on the social media world.

yeah you see us Zooey! WE'RE EVERYWHERE JUST LIKE YOU
Ever since we started up two years ago, our blog has had a LITTLE obsession with Zooey Deschanel. I don't remember how or why it started. It was probably because 500 Days was huge then. And She & Him are, and always will be, awesome.
SO it might also strike your fancy to learn that she's on a new Fox show this coming fall, The New Girl. The jury is still out on whether or not that will be a good show, but that comes later. Plus it's obviously not fall yet. Fox typically has a good roster of shows, but the plot sounds kind of hackneyed.
Whether it's been The New Girl, though, or her work with the Pooh movie, I couldn't help but notice ONE thing:
her like, CONSTANT presence in the social media sphere! Facebook, Twitter, Tumblr. YOU NAME IT SHE'S THERE. I feel like I have serious competition now. O_o
here's her main site:  http://www.hellogiggles.com which is apparently run by her and a few friends. Actually, by a "few" I mean "a lot." Hellogiggles, why do you confuse me so much?
It's kind of cool though. A 12 year old writes for it and I'm pretty sure if I wasn't scared of my extended family on my mom's side I could get my 12 year old cousin to write for this because that girl is going places because she volunteers in the library. Anyway, back to Zooey. 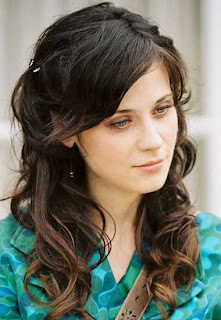 STARE ZOOEY STARE
I have to wonder though....is Zooey genuinely becoming a social media whore like yours truly? Or is this just to get people behind the Pooh movie and her new show? Questions, questions. Because I followed her on Twitter before but not like I do now!
so my goal is to outtweet Zooey before the week is over. it is said, and it will be done.
QUESTION:  do you think if Zooey reads this she will be creeped out? I'm going to say "yes." love you girl, change is hard, yes I know.