August 14, 2011
Being that it is decade week here at TUC, I have taken it upon myself to inculcate you with some of the common themes of the 1950s.

The first and most prominent theme is that of total nuclear annihilation.

The United States and USSR were regarded as nuclear titans, but a third was born with the first Godzilla film in 1954. 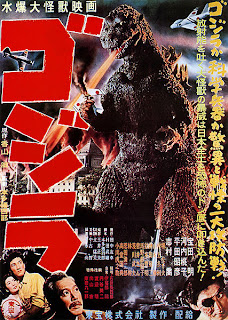 While tensions between capitalist and communist powers built, they spilled over into the Korean War. Captain America was reinvented to take down Uncle Joe instead of Hammerin' Hitler. The escalation of tensions also evidenced itself in the space race. Arthur C. Clarke imagined an extraterrestrial solution to the quibbling Earth powers in 1953's Childhood's End. Space was the new frontier, and science fiction was becoming the new western.

John Wayne wouldn't give up on the genre, though, as he released Rio Bravo in '59, co-starring with rock 'n roll star Ricky Nelson and crooner Dean Martin.

Rock 'n roll and crooner coexisted successfully in the early 1950s. Frank Sinatra would release some of his most popular hits.


In the late '50s, rock 'n roll was coming into full fruition, and it was borrowing from blues...


... and being mixed with country, soul and folk.


The Broadway musical Oklahoma! was made into a feature film, while The Sound of Music first hit the stage.


Jazz was king, but Ike was president, and everyone liked him.


And in the city of Riyadh, a child called Osama bin Laden was born.