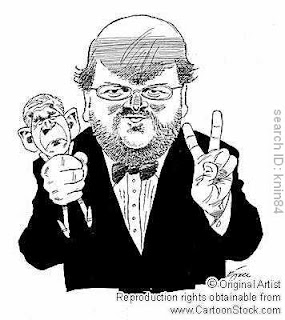 If Spotlight/Shoutout gave out statue awards, they would look like what he's choking.

Michael Moore is a name that is tossed around every few years when he challenges the ideas of the current administrations and their weak points. I wish I hadn’t reduced his career to that statement.
He has been bashed a lot by the opposition, but he has also been decked in gold at the Oscars.

So with a man like Michael Moore and his films, there are clearly pros and cons.

Pro: He has humiliated Fred Phelps from the Westboro Baptist Church multiple times.

Con: He has often been accused and noted of using data in his films that are inaccurate.

Pro: His documentaries are often entertaining.

Con: Sometimes he can be too one-sided.

What seals the deal for me?

In this video below he takes on CNN, and the real title of this should be
Michael Moore Destroys CNN!

I used to watch that network, but now they are just a waste of time. No matter how much I vent about it. It doesn’t seem to make them stop.

QATFYG
What is your opinion of Michael Moore and his films such as “Sick/O,” Fahrenheit 911,” and “Bowling for Columbine?” (Don’t forget “The Big One”.)