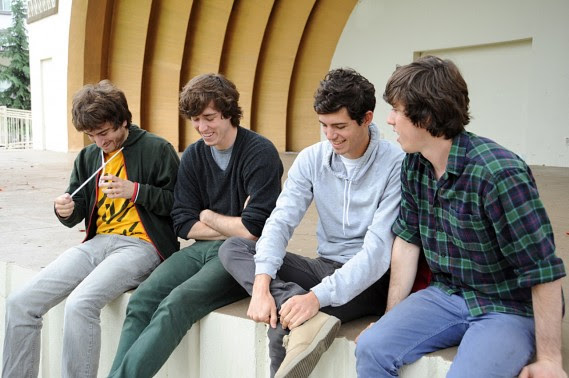 Not just a college, these days. Oh, no. Princeton is an indie pop band straight out of California. They have opened for bands like Ra Ra Riot, Vampire Weekend and the Ruby Suns (a very fun band in themselves). The band also has a pair of twin brothers in it (cool) but has nothing to do with the school F. Scott Fitzgerald went to (meh). I asked them a few questions; someone responded! :)
Princeton! Why did you pick that name? Any special affiliation with the college? Or is that just a street address?
The band:  No, no affiliation with the college.  Matt and Jesse grew up on Princeton street in Santa Monica where we all grew up.  The name dates back to just barely out of high school incarnations of the bands.
What's your back story? Every time I look you up all I find is stuff about the Princeton University Marching Band.
The band:  Yea, we’re not the most google-able band. (understatement!)  Princeton basically grew slowly during summer and winter breaks while Matt, Jesse, and Ben were home from college.  It was start and stop until the three of them studied abroad in London for a semester in 2006.  That’s when the band really materialized.  They wrote and recorded our first EP, Bloomsbury, and I joined the band shortly after in 2008.  Since then we’ve released one full length album and have toured a good amount.
What are you currently working on? Like, as I email this to you?


The band:  We have a new record completely done.  It’s in the final stages of mixing now.  If all goes as planned, that will be out early next year.  To take the question even more literally, we are on a drive across the U.S now-- LA to NYC.  We’re starting Daytrotter’s Barnstormer Tour 5 on Monday.  We’re all really excited.  I am actually responding to these questions from a Super 8 in Peru, Illinois.

Arthur Russell and John Cale are some of your influences. What are your others?


The band:  Arthur Russell and John Cale are big ones.  Steve Reich, Terry Riley, Peter Zummo, Julius Eastman, and Laurie Anderson are some others that we don’t talk about as much.


SUPERMANNNNNN
You've been described as "smoothy, classy pop." Do you agree with that? Are you classy?


The band:  Classy? Quite haha.
What's next for you guys?


The band:  Once we get home from this tour, we’re gonna lay low for the next couple of months while I’m graduating from UCLA, and then we’ll be doing a lot around the release of the record when that comes around.  It will also be coming out in Japan, so we’re going to head out there for some tour dates early next year.

You work a lot with Kisses, correct? Who do you look forward to working with?


The band:  Not exactly.  Jesse’s side project is Kisses.  The projects don’t intersect, but I’m sure down the road we’ll do some tours together.

One question to say what you want! I don't know!
The band:  Thanks for the interview!
:) anytime!