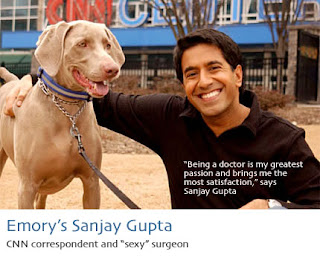 Hello Loving Wednesday; it’s time for something to fall into the spotlight.
This week goes beyond the traditional realms once again to shed light n Sanjay Gupta.
If you are wondering if Dr. Gupta receives this award simply because he has a very Indian name, you are incorrect. It’s because aside from all of his work on the not-often-worthwhile CNN, he’s one of the few people that can perform neurosurgery in a warzone. It’s rather interesting that his spotlight comes only weeks after one that went to Michael Moore, for the two of them hate each other. Either that or they just like to quabble…I think I made a new word….quabble….I don’t know, but Sanjay is rather entertaining.
Some people have it all. They get to be on television. They get to be brain surgeons.
However, I have to conclude by saying…..he has nothing on Deepak Chopra.

QATFYG:
Did you have an Indian Doctor growing up?
I know I did.