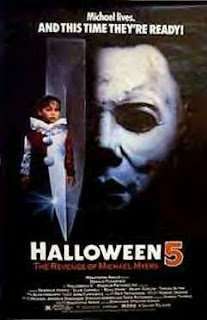 I see this movie on a ton of lists of worst horror films, and each time I feel some surprise. I am huge fan of the Halloween Franchise; although, I confess I have not seen “Halloween 3: Season of the Witch” because that film doesn't count. The first Halloween film is a chilling masterwork, which the creative genius, John Carpenter, used to reveal the serial killer, Michael Myers, into a legend for film historians to gorge and one of the best musical themes ever written.

Five movies later, I was still in love with the franchise, but “Halloween 5: The Revenge of Michael Myers” has some special qualities, which stand out so much to me, and according to the low reviews, I am the exception.

I confess, I was not crazy about the beginning of this one. I thought this film begins with a somewhat unrealistic touch, which is even a little much for this semi-supernatural horror. The film starts rolling slowly, but soon after it evolves into the single strongest quality: The Performance of Danielle Harris as “Jamie Lloyd.”

Whether people hate certain details of this film or not, they have to give some credit to this girl, for she gives an amazing high energy performance for a child actor. She shows so much genuine emotion, and it is so easy to connect and feel for the character. Danielle Harris debuted in this series in “Halloween 4: The Return of Michael Myers,” and in the fifth film, her character evolves into a depressed, disturbed, traumatized, and fearful piece of innocence constantly on the run from evil and destruction. 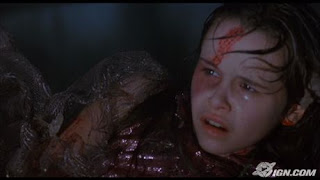 On the opposite end, this film shows the complexities of Michael Myers in a completely new realm, and it opens a door to the mysterious nuances that make this particular maniac so fascinating.

Such as this scene:

This is a prime example of how people hate this movie. This is #9 from a list of the ten worst moments in horror films, but when I first saw this film, I thought it was pure enigmatic gold.

Lastly, any film with Donald Pleasance becomes just that much better.

QATFYG:
I would love to think what “The Movie Man” would say about this film.
How much you wanna bet, he’d kick my ass?