This is Herman Cain: Book Review 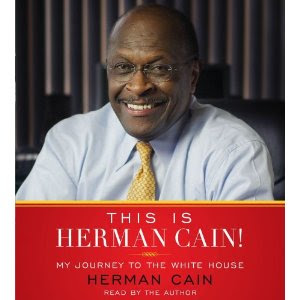 After way too long, Herman Cain is back on The UC!

A lot of politicians release books on their campaign trails. They do this to spread their ideas…to gain awareness from the public…and of course to have another excuse to end up on television.

What’s the difference between Herman Cain's book and other books by politicians?
I actually read this one.

It is a very fast read. It’s not as fast moving as Harry Potter, but I was able to read the entirety in a few hours at a Barnes and Noble. It chronicles his life of humble beginnings, and then, it expands into his journeys climbing the corporate ladders to become a CEO. There is also talk of what it was like for a black man to work in the hardnosed corporate world during the Civil Rights Era.
The book is fine, but it is by no means an over-the-top convincing hook that will pull in people to his campaign, and it will by no means change the minds of undecided voters. Most of the book is the equivalent of reading his Wikipedia and watching some videos on Youtube. This book is already-known internet media drawn out for over 100 pages. It does not provide an overwhelming mountain of knowledge and insight.

In terms of writing, it is nice to read a political matter book that is not so dense. It is a fluid fast moving read, and it is entertaining. There is a line in the book that prompted me to read it. It’s the one that all the tv shows were rambling on about, where “Herman Cain writes that he did not participate in the Civil Rights Era, for he was too young.” So many complaints on that line, that is just the media blowing ideas out of proportion, particularly some idiot named Lawrence O'Donnell. Herman Cain conquered many barriers by challenging the corporate workforce, and his efforts in that sector are not a disrespect to Civil Rights in any way.

This book is a fast entertaining read. It won’t open your eyes to much, but it’s worth your time.

QATFYG:
Have you read any of the candidates' books?