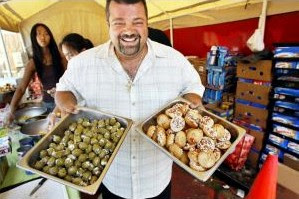 Americans have a long-standing love of deep fried food. In fact, French Fries (or Freedom Fries depending on your outlook on life) are a symbol of the American diet. So it is only natural that there is a show devoted solely to the masters of fried food.

Thanks to the lovely folks at Travel Channel, I was able to catch an episode of the show “Deep Fried,” which follows a master fry cook, Charlie Boghosian.. the famous "Chicken Charlie," working around fairs and traveling shows in California. To be honest, I have no idea if the show was a special or a running series.

The program included the obvious, which were basic tips about working deep fryers. However, it got into some really interesting parts when the fry masters reveal the secrets to frying exotic items such as ice cream bars, cookies, and even Chinese rice cakes. Factoids always make shows like this interesting, such as noting that ice cream bars need to be placed in a -40 degree freezer to hold a cold enough temperature to survive the deep frying process.

As the show carried on, one quality it really lacked was the amount of engaging personality among the staff. Shows like “Cake Boss” capitalized on selling not only the extravagance of the culinary arts and craftsmanship, but incorporating the entertaining character traits that keep the audience excited and focused on the show as if it has a worthy storyline.

Other calamities that face the deep frying fanatics are catastrophes such as…the computerized sign above the fry stand’s lights went out. So one of the employees had to call tech support, and he fixed it. (Insert Sarcasm) OH MY GOD, I could barely control myself (/Sarcasm). He called tech support, and they fixed it.

Or for example, they planned on cooking Deep Fried Beef Ribs, a dish which they had never cooked before…and the staff was nervous to no end over the new plans slash challenge. Then, in the end, they decided to coat the ribs in batter and deep fry them. (Insert Insincerity) OH MY GOD, the surprise was astronomical (/Insincerity). On a show called “Deep Fried” he decided to deep fry them.

Despite some of the mundane characteristics of the show, the deep fried beef ribs sound excellent, and I might even make them myself. The show presented some very interesting techniques for frying recipes and cooking in general, and I would definitely watch more episodes if they have any.

QATFYG:
If you could only eat one fried food for the rest of your life, which would you choose?

I would choose fried pickles.