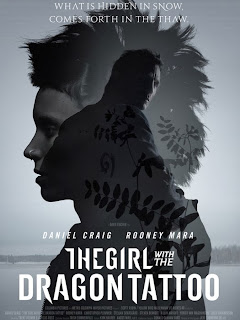 The Girl with the Dragon Tattoo (2011)
158 min., rated R.
Grade: A -
Americans aren't fond of reading subtitles when they attend movies, so many have probably missed 2009's intense and absorbing Swedish thriller, "The Girl with the Dragon Tattoo," the first to be adapted from Stieg Larsson's popular Millennium trilogy. An English-language version probably wasn't needed, but once steadily exciting director David Fincher signed on, the mass anticipation kicked in. And as hoped, Fincher's "The Girl with the Dragon Tattoo" kicks our ass.But first, the opening title credit sequence sets the dark, kinky, dangerous tone. Akin to Maurice Bender's James Bond title design crossed with a Gothic, fetishistic music video, liquid black is melded into a man and woman on a motorcycle, set to Karen O and Trent Reznor's cover of Led Zepplin's "Immigrant Song." It's jaw-droppingly awesome.

Set in Sweden, disgraced journalist Mikael Blomkvist (Daniel Craig) for political magazine Millennium loses a libel case against industrialist Wennerström and shortly after meets with elderly millionaire Henrick Vanger (Christopher Plummer). Henrik invites him to his family island to investigate the 40-year-old disappearance and assumed murder of his then-teenage niece Harriet. She went missing on the same day as the community's parade. Anyone in the aristocratic Vanger family tree, "the most detestable collection of people you will ever meet," could be Harriet's murderer. After Mikael settles into the guest cabin on the estate, he calls on inked, pierced, asocial computer hacker Lisbeth Salander (Rooney Mara) to assist him since she's the one who was assigned to do a comprehensive report on Mr. Blomkvist for a lawyer. Lisbeth is such a research whiz and already a victim of men that she doesn't even need help to find this killer of women.

The super-heroine and victim of Larsson's stories, Lisbeth Salander is a brooding, scared little girl with a punk/goth-chick regalia on the outside. Having set her father on fire at a young age and been proclaimed insane, Lisbeth is a ward of the state and given a caregiver who's in critical condition. Thus, she's placed with a parole officer named Bjurman (Yorick van Wageningen), a piggish cretin who controls her money unless she lets him have her. Lisbeth is also a sexual being, picking up a girl at a club and then having to boot her out when Mikael knocks on her door. Later, when on the Vanger island, she strips down and hops on top of a perplexed Mikael. Rooney Mara is just as fiercely committed and lived-in as the first film's Noomi Rapace, but less intimidating and tinged with a deadpan wit. (Comparing their very different performances would be pointless because both girls are note-perfect as Lisbeth.) Decked out in the black mohawk, everywhere piercings, blonde eyebrows, and tattoos, she communicates a damaged toughness, inner rage, and hunched-over standoffishness. It's a brave, star-making performance from Miss Mara, who makes the role her own. Craig is convincing as Mikael, retaining his lean, rugged sex appeal as James Bond but more scruffy and not always assured, with his reading glasses hanging off his head no less. The supporting cast is reliably solid. Robin Wright does a fine job with a Swedish accent as Mikael's magazine colleague Erika, although their affair holds less weight this time around. Sweden-born Stellan Skarsgård is great suspect casting as Henrik's business-running nephew Martin, and Geraldine James and Joely Richardson are also well-cast as Cecilia and Anita, two of the Vanger relatives.
The technical crew of Fincher's "The Social Network" is called to work again, and work they do. Jeff Cronenweth's cinematography exudes a crisp atmosphere in the Sweden locations, punctuated by dark colors that pop rather than drown themselves in murk. Percolating in every scene, Trent Reznor and Atticus Ross's music score adds an electric edge and lingering dread. The use of Enya's "Orinoco Flow (Sail Away)" as background music for the later-revealed murderer's torture games also lends a creepy aural wit.

David Fincher not only has the nerve to bring another set of eyes to Larsson's lurid, sensational pulp, but he goes into grim, ugly corners big-studio films typically don't dare. The rape scene that was just as brutally unpleasant when it was filmed overseas is staged as it ought to be; the more uncomfortable it is, the more we care to see Lisbeth seek vengeance with a blackmail video and a tattoo gun. And yet it doesn't feel exploitative. Steven Zaillian's ("Moneyball") adapted screenplay improves upon the Swedish version and falters in others, but Fincher seems to pull it all off with slick ease. Before, the murder-mystery whodunit was less compelling than Lisbeth herself, but here, it's an involving, meticulously crafted sleuth-procedural (à la 1995's "Se7en" and 2007's "Zodiac"). Fincher beautifully levels pieces of narrated exposition with memories set on the Vanger island, and the pacing is tighter even at two hours and nearly forty minutes. The suspense is still there, the labyrinthine Vanger family tree is more coherent, and deviations from the story still come as surprising. But Salander's early investigation of Wennerström feels distracting and could've been done away with altogether. For a long time, the film cross-cuts between Mikael and Lisbeth's respective storylines until intersecting an hour later. They make an intriguing team when it comes to playing Sherlock and Watson. As lovers, they don't make the most plausible of bed partners, which Zaillian really plays up, but that's not really the point. "Girl" doesn't retain the same resolution of this film's Swedish counterpart, but rather than feeling anticlimactic, it's dramatically purposeful. In fact, the very last coda gives Lisbeth a soul. Until the soft-pedaling of our girl, "The Girl with the Dragon Tattoo" is cold, propulsive, and confidently made. It leaves bruises, but you'll covet more if Fincher brings us "The Girl Who Played with Fire."