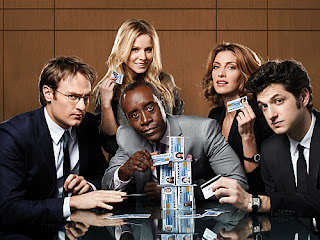 I had to go with C. Who wants to watch a show about smarmy corporate con men? Me, as my first impressions of the show were wiped away by the opening scene of a naked Don Cheadle. Damn, that man has a fine body. It is important to note that like many Showtime series, there is always more to the overall premise.

Throughout the episode, Marty has fourth-wall-breaking asides to the viewer (a la Zack Morris). Did I find these attempts at levity and exposition:
A) Clever
B) Trite
C) Pretentious
D) Sexually Frustrating

If you thought I’d say A and C, you’d be correct. At times, these asides are witty, like when he’s explaining why he had angry sex with his ex-wife. Other times, they are pure exposition, borderline infodumps, as he defines corporate jargon for us. Granted, I didn’t know what the definition of “double-booking” meant till Marty explained it, but I feel that this kind of narration (oh, and it is narration, don’t fool yourselves into thinking it’s not) needs to die a quiet death in its bed surrounded by its loved ones.

Let’s get to the question you all—okay, me—have been wanting to know the answer to.
How awesome is Kristen Bell in terms of her other roles?
A) Veronica Mars
B) Sarah Marshall
C) That girl from Heroes
D) Any of those awful rom-coms she’s been in
(I will watch you in anything, Kristen, but even I have my limits)
E) Burlesque (LOLOLOLOLOL)

It’s split between A and B. Bell plays Jeannie Van Der Hooven (yikes, what a name), who studied business psychology at Colombia, as she’s quick to point out to Marty. Jeannie has a mean wit (Veronica Mars) and a naughty side (Sarah Marshall sleeping with Russel Brand). And the banter between her and Marty is great. Oh, and she’s the kind of girl who will go to a strip club with her fellow associates and get a lapdance.(Yes, it happens. And it's awesome.)

Speaking of her fellow corporate con artists, Clyde (Ben Schwartz, the one and only John Ralphio on Parks and Rec) and Doug (Josh Lawson, hasn’t been in too much stateside, which is a shame) are:
A)Boring
B)A waste of screen time
C)Reserved and introverted
D)A pair of scene-stealers with homoeroticism to spare

Yes, it’s totally D. How did you know? For two relatively unknown actors, they manage to steal many of Cheadle and Bell’s scenes. While I would have enjoyed a bit more characterization, I’m hopeful later episodes will expand on that. The latter part about homoeroticism is just wishful thinking on my part. They would be so hot together, though. Just saying.

If Cheadle and Bell don’t have chemistry, then there’s no reason to watch.
So...do they? Have it? The chemistry?
A)Yes
B)No
C)All of the above

It’s C, unfortunately. There is chemistry there. Cheadle is a fantastic comedic actor, something that just plain surprised me. I’ve only known him in dramatic roles for the most part (Hotel Rwanda, Traitor, etc). I mean, I’m sure he’s been in comedies before, but that’s not my default when I think of him. On the flip side, the role of Jeannie seems tailor-made for Bell. She defined the strong, funny, independent woman for a generation as Veronica Mars, and it’s good to see Bell in another well-written part that showcases her strengths as an actress (actor, whatever).

That being said, the both of them do have chemistry. But, can I be honest? No? Well, too bad. I am sick to death of the “will they/won’t they” trope. Marty is certain he and Jeannie will sleep together (he says so to her face on more than one occasion), but Jeannie is having none of it. Right. Give us all a fucking break, writers of the Showtime original series, House of Lies. They’re gonna do it. It’s a done deal, we’re all just waiting for the inevitable. So prove me wrong, House of Lies writers: don’t make them have sex. Because that would be refreshingly honest (Get it? Cause the show is called House of Lies?).