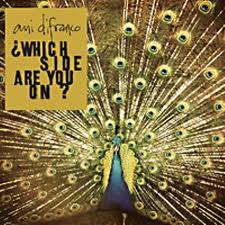 It's been a while, I know. Truth be told, I've been sitting on this review of Ani's new album, Which Side Are You On? in order to let my rage subside. You'll see what I mean.

Remember the 90s? More specifically, the women musicians of the 90s. Remember how there was this cultural movement where record labels and fans in general embraced the idea of girls with guitars (or keyboards, or what have you) who sang songs about sex and love and loss and inequality and politics?

I’m asking these questions because I feel those days are far behind us. And Ani Difranco proves it with her latest offering, Which Side Are You On? So many of my beloved rock goddesses—Ani, Liz Phair, Tori Amos, Sarah McLachlan—have produced some music that just doesn’t do it for me (Night of Hunters was surprisingly good, however).

Ani, I’ve loved you ever since Not a Pretty Girl, it literally changed the way I thought about women, sex, abortion, glbt issues and the place of women in the music industry. Even though I was just an adolescent, I was a gay one at that, and your words transcended gender identity. The title track from that album wasn’t just about girls, but boys and everyone in flux. Do I even have to say what an amazing combat boot to the face your album, Dilate, was? If I could have worn out that CD, I would have.

I even enjoyed your post-angry stuff as well. You have to admit that after Dilate, your music got decidedly upbeat, experimenting with jazz and funk. Every so often a certain track would floor me (“Birmingham” comes to mind). And the Joe Henry-produced Knuckle Down was just plain great.
But now we come to the part I hate. The part where we need to talk about that Red Letter Year atrocity. Actually, no, we will not talk about it. It was a bad album. End of story.

So, you’re probably wondering what I think of Which Side Are You On? Well, it’s not as bad as Red Letter Year, but I feel like you’re tired, Ani. Tired of playing up the “angry-go-green-bisexual-warrior” caricature that people seem to want from you. You’ve got songs about politics and sex and smoking weed and the poor/rich dichotomy. All pressing issues, certainly. So why does it feel like I’ve heard every one of these songs before?

The opening song, “Life Boat,” has some disturbing and lovely imagery. But poetic license notwithstanding, the word “cacophony” defines a clamorous sound, not city lights. Come on, Ani. That’s some A Night Without Armor nonsense. (If you can find the actual interview with Kurt Loder, please send it to me!)

I want more songs like “Hearse.” That song says more in its 4 minutes than the title track itself.
And “Promiscuity” is a meaningful, upbeat song about, well, exploring. It makes me think of “Little Plastic Castle,” in its smart wordplay. Unfortunately, these are the few bright points in an otherwise lackluster offering.

Take, for instance, the song “Albacore”...what song is that? I forget it the second it’s done, sorry to tell you. It is such a blatant love song it makes my teeth hurt.

“J” could be a good song, but it would have been a great song on, say To the Teeth. It would have felt more relevant five years ago. I’m also going out on a limb and wager there’s something about hurricane Katrina in this song.

“If Yr Not,” whatever, Ani. This song is one long cliché. Speaking of cliches...

“If you don’t like abortion, don’t get an abortion” is just a choice lyric from the song “Amendment,” a smarmy and lazy song about the fight for women’s equality, that chokes on its own cliches. Yes, women’s rights are so absolutely vital—this country is stuck in the dark ages when it comes to equal pay and abortion, not to mention gender roles. But when you write songs that are so lax, so ineffective in both musical and lyrical content, what are people supposed to think? This song brings nothing new to the battle. As a feminist myself, this song made me long for the devastating understatement of “Tiptoe.”

I feel like you’re stuck in some kind of time warp, Ani. The title track is by all rights a powerful protest anthem, but I can’t escape the feeling you’ve done this before (and it’s a cover song, too). Even the melody is reminiscent of a 70s protest jam. I’m sure it’s intentional, but if you want to get people to vote, most of the newer generations don’t care what happened in Vietnam, let alone what stepping into the booth has to do with anything they care about (yes, yes, I'm aware we don't have booths anymore).

To use a well-worn cliché, it feels like you’re preaching to the converted, Ani.